It was ever thus 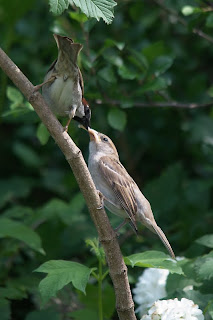 House sparrows
After close of play (brought on by bad light), a too-much-chilli powder evening meal and listening to the Archers I went out for a canal-side walk, taking my 70-300 zoom with the macro facility looking for insects and spiders, when the sun came out again. As soon as I approached the reedbeds reed warblers were in audible evidence and in good view too. Typical. I snuck off into a field of thistles and immediately heard a chiffchaff, and then saw a couple of them in the hedgerow.

Lacking much cover I squatted down in the thistles and took my chances. If I'd had the right lens I might have got some reasonable shots, as it was I had to settle for enhancing heavy crops. But they're okay on the screen if not good enough to print out at poster size! The unexpected blackcap that appeared briefly deep in the hawthorn was less presentable, but I present it here for entertainment value. 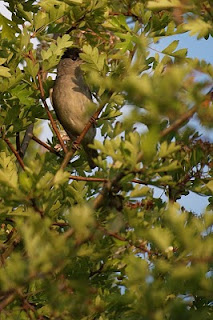 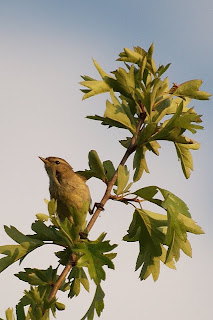 Chiffchaff
Leaving the field I carried on, hearing and then seeing a whitethroat and yet more reed warblers out in the open along the reeds' edge. I was all set to grab a shot of a cranefly when it flew. That was the only insect I saw in the hour or so I was out looking for insects.

I guess the only way to be prepared for all eventualities is to take the kitchen sink along. Although that would probably guarantee seeing nothing at all, or being faced with too many choices. Hey ho. All part of life's rich pageant.