Wimping out with a whimper

Another season draws to a close and I find it hard to believe I never wet a line in the Trent once. I was tempted to make the journey for the final day, but ended up locally trying for one final barbel to round off my best season on the river.

With four cars in the car park there could have been eight anglers on the stretch so I thought it wise to take a walk before dragging my gear along the bank. Within a short distance I could see three fishing, so there's be plenty of room for me to squeeze in somewhere. I retraced my steps and loaded myself up. I'd soon passed three more anglers and the swim I was hopping to fish was free.

It was another fine sunny afternoon, although the north-westerly was cool again - but not as cool as it had been of late, the sun is warming up. If anything the river was a midge's lower than on Friday, it was over a degree warmer at 6.7c. For some reason this rise didn't boost my confidence. Had I been on the Trent with that reading I'd have been well happy with anything over 6, but on the Ribble I prefer a reading over 7 - even though I had caught on Friday with it lower. A strange thing confidence. The fact that the temperature was holding steady did nothing to brighten my mood.

Reasoning that the maggots had produced a couple of bites on friday I cast out a boilie on the upstream rod and rigged the other up to fish a large feeder with four maggots on a size ten to more suitable line for barbel than I had on the tip rod. It's never worked in the past, but you never know! 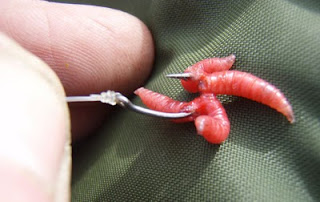 It'll work one day
Every now and then the wind would appear to drop. I think it was just swinging to a direction where it was deflected by the high bank on the opposite side of the river as I could still hear it roaring through the trees. When it did drop things warmed up in the sun. The rods remained motionless.

On winding in the maggots for a recast one had been nipped. Not a full blooded chub-crush, just the very tip. I shortened the clear mono hooklength from three feet to eighteen inches. On the next recast two maggots had been nipped. I was tempted to break out the quiver tip rod and try for whatever was doing the nipping, but I was there to catch barbel. So I didn't.

Towards dark the wind really did ease off. Only intermittent though. From dusk onwards the breeze would spring up and die off. Cloud cover moved in so it was remaining mild. After darkness proper arrived I swapped the maggot rig, the maggots again having been nipped, for a S-pellet. The rods remained motionless.

A few small fish had topped on dark, and a few more fish splashed in darkness - probably sea trout by the sound of them. It had been a quiet afternoon. Not much in the way of wildlife activity, save for a buzzard being mobbed by three crows. The bankside vegetation didn't seem as far advanced as in years past on the final day of the river season. The nettles and other annuals were just poking their heads through the soil whereas last year they were an inch or two high during the season's final week. 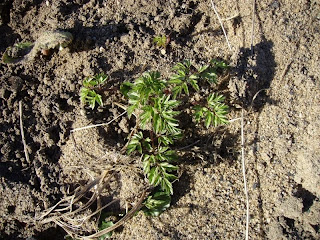 Seeking the sun
By eight I was getting the feeling that it was all over. I moved the pellet rod upstream then admitted defeat with two and a half hours of the season remaining. The first time for a few years the final day has been a blank for me. Not unexpected given the conditions. Barbel had been caught, but not many.

I think it was a case of dropping a bait on a barbel's nose or waiting for one to slowly sidle up to your bait. I'd been leaving my baits in place for at least an hour and keeping the feed (small bags of small pellets) to a minimum. Had I been fishing a smaller river where fish holding spots were tighter then moving and fishing each spot for a half hour would have been an option. On a river where fish holding spots can be large but far apart then I prefer to throw all my egs in one basket and try to work one all session. This time it didn't pay off.