I should have known better

Another free afternoon and not a clue what to do with it. Something made me dig out the pike rods and set off for the drain, to an area that can produce at this time in the season. I think the reason I was attracted to this length was the fact that it's so peaceful. being out on the mere with everything happening in the distance is relaxing.

Nonetheless as soon as I had the baits out, a sardine a smelt and a lamprey head, and I was drinking my first cup of flask tea I was wishing I was doing something else. There are times when you have to do things to remind yourself why you stopped doing them. This was one of those times. To really get the benefit from fishing you have to enjoy the not catching as much as the catching. It seems I no longer enjoy not catching pike.

Despite the feeling that I was doomed to blank being there was good. Again I could feel the sun's strength increasing, so I laid out the unhooking mat and basked upon it like a large green lizard. A lizard wearing boots and a woolly hat. There was distant tractor noise, the fields having dried out after a long period of waterlogging the farmers were working hard, through the faint engine noise bird sounds broke through - the chinking of a great tit, the drumming of a woodpecker, and a miscellany of song in the wood behind me. Every so often a huge flock of wood pigeons would take to the air, swirl around overhead and descend again on the field they were feeding in. Hundreds of them. No wonder the bank was littered with empty shotgun cases, and pigeon feathers.

By four thirty the heat had gone from the sun. I was sat up in my chair wasting my life away, pondering why I didn't pack up and go home when I saw a falcon coming over the mere. I took it for a kestrel at first, but it was too big and bulky. Through the binoculars I could see the distinctive cheek patches of a peregrine. The bird swung round and circled over the fields then made its way west towards woodland. No doubt in search of pigeon for its supper.

By five thirty there was a chill in the light wind. A clear sky and little wind could mean another cold night ahead. It was getting towards home time. I had had more than enough by six. The final cup of tea was drunk when I heard something scuttering across the drain, sounding like a moorhen. Not a moorhen but a water rail that soon disappeared between the reed stems on the far bank. Seeing those two birds were certainly examples of the 'more' that there is to fishing than catching fish. But without fish it's bird watching. 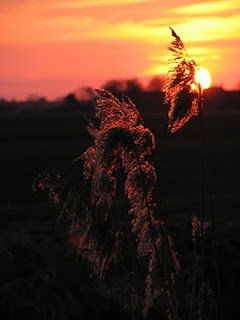 The sun sets over West Lancashire's version of Fenland
Posted by Dave Lumb at 7:41 pm