After fighting the weed at the weekend I didn't really feel like tench fishing and was stuck for an idea what to do. The problem with becoming an 'all-rounder' is that there are just too many options! Tuesday was wasted in indecision, so by lunchtime on Wednesday I was in the car heading for the tackle shop and some bait. Although I still didn't know where I was going or what I was after catching. I had plenty of groundbait, bought some maggots, and still was clueless!

After a chat with my mate in the shop I decided it was bream or bust. A few hours later the indecision was about which swim to choose as I had the entire lake to myself. I plumbed the shallows, which were fairly weed free reasonably close in and the wind was off my back - which was handy as I managed to cast off my plumbing float...

Like a fool I decided that it would be better to fish the opposite bank. On arrival there the weed was pretty thick, but I found that at forty to fifty yards it was clear, and there was around nine foot or more of water. I mixed up a couple of kilos of groundbait and balled it in, leaving enough behind for adding to the method feeders. Then I spodded out some pellets, set the rods up and settled in for the night.

It had been warm and sunny when I arrived but it clouded over at dusk. Although this meant I was able to sleep wearing my bunny suit under the bedchair cover it also meant that the dawn was grey, and showery.

The night had passed surprisingly uneventfully. Although I wasn't after them a tench had rolled in front of the rods before dark. However it may have been a prelude to sexual shenanigans as I am pretty sure I saw tench spawning when the light had faded enough for the head torch to be required. It was certainly too dark to be 100% sure what was writhing in the marginal weed.

I hadn't set the alarm, but still awoke shortly after first light. After the usual cup of tea I rebaited and recast then nodded off again. What befell my eyes when I awoke didn't fill me with glee. I'd been robbed of groundbait. By ducklings... The greedy little half-grown beggars had scoffed the lot, and paddled their muddy little feet all over the groundbait bowl and my catty! 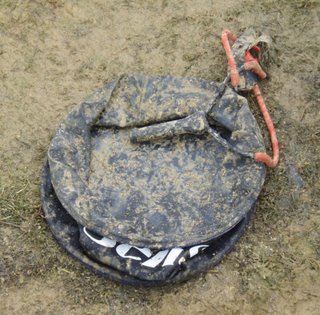 I've been robbed!
They were unrepentant too, and weren't for being told to **** off - just coming back for more as soon as I turned my back. When I mixed up another bag of feed I made sure the bowl was duckproof. 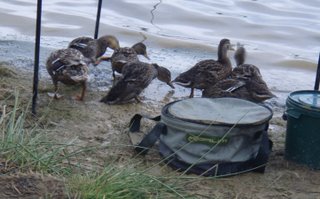 Thwarted!
During the morning I swapped rigs around. One rod fished The Rig with an eighteen and two maggots to see if there were any roach or hybrids about while the baits on the other two rods were varied between pellet, fake corn and 10mm pineapple boilie - all baits that could pick up almost anything. It was noon before a smallish roach fell for the maggots. At least I hadn't blanked. 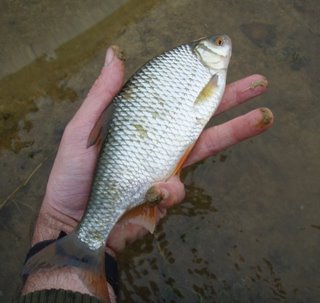 A slightly larger skimmer came along around three, but it was pretty quiet. More bait went out in preparation for the hours of darkness; groundbait, maggots, pellets and seeds. The spodding process was carried out in two periods. Not for any carefully thought out reason, but because I cracked the spod off and had to wait for it to drift back into the bank before recommencing the bombardment. That's the second time it's happened and I reckon it's time to step up the line on the spodding reel. Although I use a shock leader it is the shock of the line hitting the clip that seems to be causing the leader knot to fail. Back to the 30lb Power Pro, methinks.

I was confident that a pellet, a boilie or the fake corn would be picked up by something in the night. Untroubled by nagging doubts I was asleep well before midnight, and again didn't need the sleeping bag. At twenty five past four in the morning I was staggering out to the rods, trying to get my specs on and remain upright before determining which rod had caused the remote sounder to disturb my slumber. It turned out to be the middle rod fishing the boilie and the culprit looked more like a roach than not to my inexpert eyes. 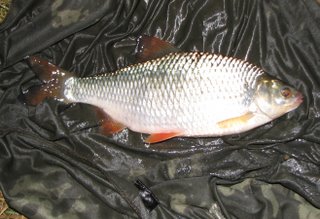 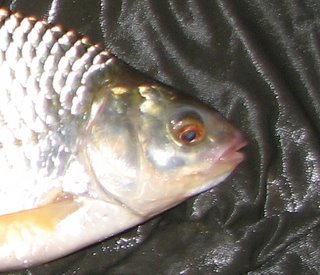 The helicopter rod was converted from a pellet/bag rig to a maggot/feeder. The hook was a size 14 Animal and four red maggots were crammed on to it and a piece of red rig foam trimmed to give a slow sink. This produced a small roach/bream hybrid an hour later that had had a lucky escape from a small pike by the looks of things, followed by an equally small roach. The day tried to warm up, so I donned my waders and searched the margins for my missing marker float. And found it in the reeds near the next swim!

With that I called it quits while I was ahead.
Title-link
Posted by Dave Lumb at 9:32 pm