I was pretty sure I'd spotted a fish being returned up the opposite end of the lake on my last day there, so that was where I hoped to fish this time round. With the weather turning suddenly hot I reasoned that the shallows would have warmed and the tench would be mooching around them. As the prevailing wind had been blowing into that end of the lake that was a second reason for the choice.


Arriving in late afternoon I was surprised to see just one angler in the area, and only a couple more on the rest of the lake. A chat revealed that there had been a few tench caught in the area over the last week, but that the guy fishing there now hadn't had a bite for two days and nights. I then went for a look around as another option was a large shallow bay round the corner. An hour later I was setting up in the next comfortable swim to the bloke already fishing. The bay didn't look any more promising, and was a midge infested swamp!

By the time I started setting up camp the strong wind was easing to manageable proportions and everything calmed off nicely towards dusk and a night so mild that the bunny suit was surplus to requirements and the sleeping bag didn't need zipping up. I soon had a couple of indications to the maggot feeder, just twitches that could have been liners, which suggested there were fish in the area. With catches being just a few fish I kept the baiting minimal, ten or so spodsful of particles, dead maggots and pellet mush topped up with the method and maggot feeders. 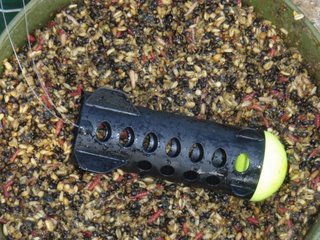 Preparing to get some sleep the alarm on the middle rod with the trusty method feeder fishing two grains of plastic corn bleeped a couple of times. Popping my head out of the bivvy I saw the bobbin right up on a tight line. Lifting into the fish I felt the nodding weight of a bream. My first double from the water and, apart from a split tail fin, a nice clean, young looking fish. 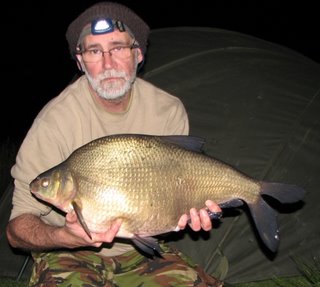 Half an hour later the same alarm signalled a far more positive take, and after a good scrap a tench was landed. A female of five or six pounds. Things were looking good and I was anticipating more action through the night. It never came. One more twitch and that was it.

In the morning there were tench blowing over a wide area in front and to either side of me and the other angler, but as usual they didn't play ball. Out of the blue the other angler, who had broken his duck with a few small bream in the night, landed a male tench around ten o'clock with the sun beating down. He packed up shortly after and I was on my own on that length of bank watching the scummy algae and weed drifting on the surface as the bottom 'broke up' with the heat.

What little wind there was caused this scum do drift into, and collect on, my lines requiring it to be cleaned off at intervals or it would have clogged in the tip rings had I been lucky enough to hook a fish. As the water went calm when the sun set the scummy blobs remained on the surface slowly drifting straight in to me. When I got up in the night to see what might have caused a single bleep I spotted huge mats of scum drifting in. I put on back leads to prevent problems. 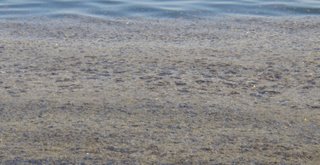 By dawn the scum had cleared, but the wind failed to gain any real strength and more blobs started to appear. I decided that the best plan was to move upwind to find a spot where the wind would drift the scum away from me. With the sultry conditions there were plenty of pike basking in the marginal shallows, all either small or very small.

Although the swim I picked had produced a few double figure bream over the last couple of weeks, and I had seen tench bubbles moving through it last week, the afternoon, night and first four hours of daylight were completely fishless. I'm sure that it was a combination of bright sunshine and lack of wind, plus the bottom 'breaking up', that was the reason the fishing was patchy. The lake is either going to switch on big style soon, or continue to be moody for the rest of the spring. Knowing my luck it's going to be the latter.