As promised here's a description of The Rig that I have been using with some success for a number of species. There are a number of variables that can be changed to suit the baits being used and fish being sought but two constants are 14lb ESP Power Gum and Drennan Grippa Stops. 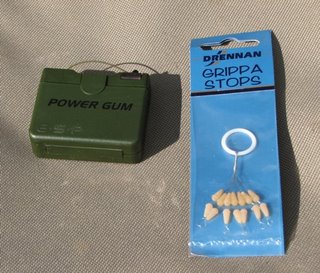 I don't claim this to be an original idea, far from it, as it is in fact a variation on the helicopter roach rig described on FISHINGmagic by Andy Nellist. I wonder if Andy has ever been a carp angler? Because his rig seems overly complicated to me! Admittedly the Grippa Stops weren't around when that rig was described, and they do make the rig more streamlined.

The first thing I got rid of was the upper hook. I have a hatred of double hook rigs ever since I watched an idiot (there is no other word for him) fishing one with two hair rigged boilies for tench in thick weed at Sywell back in the dark ages. He was getting runs okay, but unsurprisingly losing more fish than he was landing (which wasn't many). Why he couldn't work out that the hook with no fish attached was the problem I haven't a clue, but I saw him retackle with the same double hook rig... 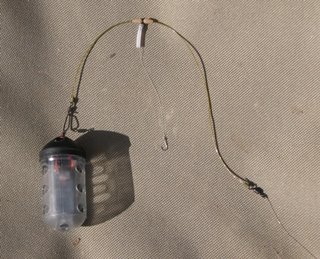 I first knot the Power Gum to a size 10 Power Swivel using a four turn Uni Knot, then add a Grippa Stop followed by a size 12 Power Swivel and the second Grippa Stop of the pair. Finally a Hiro Rollsnap is knotted to the other end of the Power Gum. The snap link can be any kind you like really as it only serves as a quick change device for removing the feeder when packing the rods away, so it doesn't clatter about when the rod is broken down rigged up with the hook placed in a rod ring, but the Rollsnaps are quite neat.

The length of the Power Gum isn't critical, but should be at least twice the length of your hooklink and no more than twelve inches. I suppose that the longer it is the more shock absorbancy there is - which would be handy with very light hooklinks. The hooklink should be no more than four inches long, it's strength and the hook size being determined by what you are fishing for. I must say that I have found that with these short hooklinks fine line is not too critical, so I rarely go below 0.11 Reflo Powerline even with a size 20 Animal.

You can either tie up your own hooklinks, with a loop to make gauging length easier and to facilitate quick changes with cold hands, or if you find small hooks fiddly to tie you can buy hooks to nylon which you can cut down to suit.

Some people might prefer to set the Grippa Stops closer to the Rollsnap so the bait lies at the side of the feeder, but even with the little bit of silicone tube over the small swivel acting as a boom I find the hook can get stuck in one of the holes in the feeder. Placing the stops so the hook lies just above the lower knot makes the rig less tangle prone and doesn't seem to affect catches.

On stillwaters you fish The Rig on a tight line with a heavy bobbin to show dropbacks, which is what the vast majority of bites are unless you are on a commercial full of daft carp! Where carp are a possibility then a baitrunner should be used and engaged, but where they are not a problem I have managed fine with a standard fixed spool reel. I've even used this on rivers using a quiver tip as bite indication and it has worked superbly.

As well as using The Rig to catch my target species I have also taken to using it to supply myself with livebaits as it requires no effort and is a pretty foolproof self hooker. Just cast out The Rig with a size 20 and a single maggot and wait for something to hang itself. A packet of hooks to nylon and a couple of Power Gum links now live in my pike box!

One word of caution. Make sure that the hooklength is always lighter than the main line, and certainly no heavier than five pounds, just as a safety measure. For use with heavier hooklengths then a safer feeder rig is this one. I have recently streamlined this rig by swapping the Run Ring for a Rollsnap, and replacing the upper bead and stop knot with a Grippa Stop. So far it seems to work.