Having bought myself three new reels recently I have been itching to try them out. I have been looking for an intermediate size baitrunner-type reel for some time. The Okuma Epix Pro 30s that I use for perching have been great. Nice and smooth with a reasonable front drag too. But they are a little small for tenching, while I find the Shimano Aeros just a tad too large and don't like the fact that the various size spools are fitted to one size of body. That was why I got myself three Daiwa Regals last spring, but they proved a bit frail in my hands. The bale arms bent just by looking at them for one thing!

After a bit of interweb surfing I settled on the Tica Sportera 3507. These have the size of spool I want with a body that is in proportion. The baitrunner lever (or Hit and Run lever as Tica call it) operates the same way as the Shimanos I'm used to - unlike the Daiwas - so eliminating confusion. Initial impressions are good, but of course new tackle means blanking, so I'll have to report back more fully later in the year! 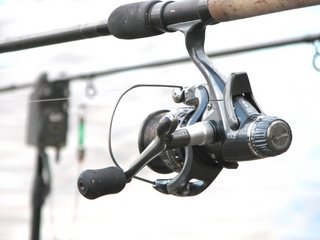 First time out was an afternoon roach fishing session in the same area of the lake that had produced on my last couple of sessions. Result? Five hours before I got a bite, followed by a small roach and a Tommy ruffe...

Undeterred I loaded the spare spools with some heavier line and headed for The Crow Pit, which I had never set eyes on before. The day was cold and wet as I set off, but although there were showers forecast (which duly arrived), I found a sheltered little sun trap to spend a pleasant afternoon watching swallows and martins from. Crystal clear water with no features I could find, and few clear spots, I fished three rods for almost eight hours with one half hearted bite (to double maggot) for my trouble. This was more an exploratory session, as much as to actually find the place as anything, than a determined attempt to catch some tench (or bream). That's what I keep telling myself, at least.