Seeing my first swallow of the year doesn't guarantee that summer is on it's way, but breaking out the overnight gear does. This first tench session of the spring was as much to check the gear out and see what didn't work as to try and catch some tench. In fact part of the plan (!) was to fish for perch. So I was sort of pleased to find the favoured early season tench swims all taken and my preferred perch area vacant.

A lobworm went out first, swiftly followed by a maggot feeder fishing two plastic casters on a variation of The Rig. Then I set about rigging up two more tench rods and making camp for the night. I could only manage the one night as I had an appointment with a customer arranged for Saturday morning. Which was handy as the forecast was for Friday night to show a drop in temperature! 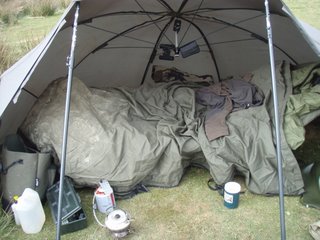 Before this session I already knew that my sleeping bag was due for replacement and had picked up a new one from Aqua earlier in the week, and a couple of days later I discovered the waders I had bought this time last year were goosed. So a cheap pair were purchased when I bought my maggots en route to the lake. Apart from a dead isotope in one of my bobbins everything else seemed to be functioning well. A third rod went out with a method feeder and a 10mm pineapple pop-up on it. During darkness the worm rod would be swapped for another maggot feeder, this one an in-line job, also fishing two fake casters. Around seven as the sun was starting to sink I got a drop-back on the middle rod fishing a variation of The Rig and a nice surprise roach/rudd hybrid was landed. 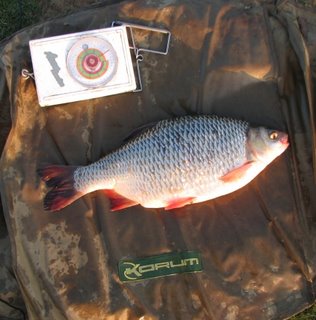 By ten o'clock I was tucked up in my cosy new sleeping bag and drifting off to sleep. Although I was undisturbed by fish I slept fitfully as I usually do on the first night, or if doing just one night. Come morning and the feeders' contents were replenished and launched back out just over the weed edge. Shortly after breakfast there was a storming drop-back on the in-line feeder rod and I connected with something that had more life in it than the hybrid. I was thinking that my first, albeit small, tench of the year was on it's way to the net. After a bit of charging about under the rod tip I got a real shock when a spiny dorsal broke surface and a perch slid into the mesh. A decent one too, but covered in leeches. 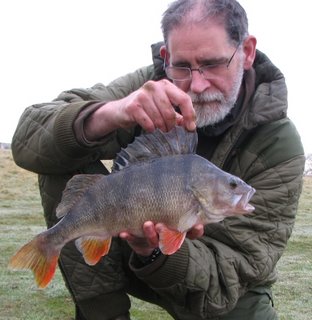 Two plastic casters on a short hooklink and a semi-fixed feeder is hardly your actual perch method of choice, but this is my fifth, and biggest at a shade over three pounds, to the method. Food for thought? I hastily cast out a worm on a more traditional running feeder rig, but it was ignored for a few hours before I swapped it for another feeder rig and two more plastic casters.

The day progressed quietly. I failed to connect with a couple of bites, one to the boilie and one to caster and that was it. At five I put the stove on to heat up a tin of Irish stew, and before it was hot enough to eat the middle rod was away. The only trouble with using 2.25lb rods for this sort of game is that size 16 hooks can easily be ripped out if you apply too much pressure, so I tend to play fish gently by backwinding. I've reverted to the rods I used the season before last, rather than continue with my 2lb Torrixes, because they seem to handle better the heavy modified Black Cap feeders and method feeders I like using . The action is less tippy but the overall power quite similar.

Anyway, the fish was netted and proved to be another hybrid, this time a personal best roach/bream of over five pounds. Some people may scorn hybrids, but a fish is a fish and a PB a PB! Sacked up while I polished off the stew it was quickly snapped and returned. 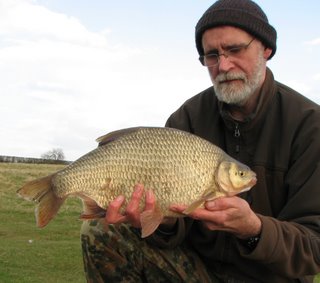 With just three hours or so of daylight left I had two more fish, both small, one a skimmer which somehow managed to remove one of my casters from the hair (I did retrieve it so no need to fret!), and the other a roach which took two red maggots that I had replaced the casters with.

Maybe no tench, but five fish, all different, (including a hoped-for perch by accident!) and one personal best made for an enjoyable 28 hours or so.
Posted by Dave Lumb at 9:53 am