That was a week that was 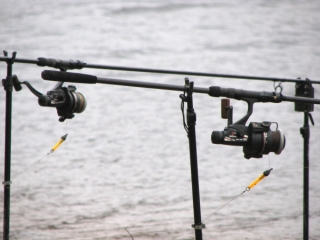 Not much of a week though. Sunday saw an unexpected barbel blank on a river that was warm and coloured. At least I got away for home before the rain set in, the roving approach having proved as unsuccessful as the pick-a-swim-and-sit-it-out approach of last week.

Thursday saw me snatch an hour and a half ostensibly lure fishing for perch on my local canal. The upside was that the canal seems to be recovering from the removal of weed beds and bankside trees a few years ago when it was tidied up by the British Waterways Board. The bushes on the towpath side that provided cover for pike have all gone but there is some marginal growth in evidence. It didn't take long for me to remember how much I have grown to hate lure fishing. After a quarter of an hour of nothing other than removing dead leaves, twigs and weed from my lures I was fed up with the process. Using a small 'coffee grinder' didn't help matters either.

It took about as long before I gave up on the perch and started twitching a small minnow bait, a guaranteed jack catcher. Sure enough a small one hit the lure in mid retrieve and briefly imitated a perch. I'd bought myself a small rubberised pan net for this venture (one I had intended to repeat during the close season) as my previous attempts at hand landing perch have always seen them drop off. I thought that the rubberised mesh would be fairly hook-proof so rather than grab the little scamp I netted it. Mistake! It went berserk in the net and the hooks tangled so badly I had to resort to the knife. 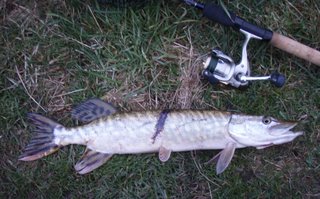 I'm not too sure what caused the gash on the jack's flank, there didn't appear to be matching marks on the other side to suggest a pike attack. But you never know. I fished on and an even smaller pike grabbed the lure but fell off. That was it. I'd had more than enough. Lure fishing's okay - so long as you are getting instant action. If it's slow I prefer to sit behind the rods these days, waiting for an alarm to wake me up!

I was stuck for ideas on what to do on Friday, so I returned to Laxative Lake for a pike session. The weather was windy, but not gale force and the rain held off making it pleasant so long as I stayed behind the brolly. Four runs; one dropped, two jacks, and a pinched bait. I'm pretty sure the first jack had been responsible for the dropped run, but how a bait that was tied to the trace got pinched I haven't a clue.

On Saturday I returned for a morning session in another area of the lake. The wind had swung from the west to the south, and there were showers. Again the brolly made life bearable. A bobbin dropped off twice, neither time being the result of pike activity but wind and undertow.

So that was a week. I hope next week is the week.
Posted by Dave Lumb at 9:22 am