Not being able to face a two a.m. start in order to be certain of a peg on a popular day ticket stretch of the Trent I headed elsewhere for the final two days of the river season. I was surprised to find only one other barbel angler out and about when I arrived so walked a stretch I hadn't fished since July and picked four swims to fish during the afternoon and evening. The river was up a touch and carrying a healthy amount of colour to fish well during day light. The first two swims produced nothing but just as I was readying myself for a move to the third one two more barbel anglers arrived, walked past me and dropped in swims three and four.

I'd not taken the water temperature at the start of the session, but when I did I found it to be a disappointing 6.2C. With my plan thwarted I made a hasty decision to move venue. After a minor detour I arrived to find one car in the car park. Walking down the bank my fancied swims were vacant. However I walked on for a chat, to discover that one of the anglers had caught an eleven pound barbel, and that they were packing up. Not one to look a gift horse in the chops I went back for my gear and fished the 'going swim'. That was at five o'clock and by half ten I hadn't had a knock! Still, it was a mild night, with the brolly keeping the wind off me, and there is no finer way of spending an evening that fishing while listening to Test Match Special on the wireless. Especially when England are doing well.

I soon nodded off in the back of the car, after wrestling with the broken zip on my sleeping bag - which was undoing itself as I drew the slider up. When I awoke I was surprised to find a light frost. The sunrise was quite something, and the day promised to be less windy than of late and dry. 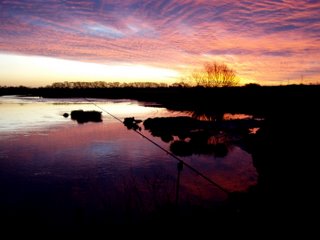 Settling into the swim I had vacated the previous night it wasn't long before a chub of about three pounds was landed from the far side of the river. There being a crease at either side of the river, which narrows up at this point, gave a few options for bait placement. So I moved the two baits around the area for a few hours. Nothing else came along, so I wound the baits in and went for a wander with the spare rod to do some feature finding. This didn't reveal the deep channel I had expected to find on the outside of a bend, but it did show up a run of deeper and slower water, under the rod end, with shallow gravelly water above and outside it. The bed of the river was also a jumble of rocks in the slower run. A move was in order.

I gave it a couple of hours in that spot, getting attention from chub on the 10mm pellet rod, before moving again to another similar section upstream. This spot was given another couple of hours, during which time I took the water temperature again to find it had risen from the morning's chilly 6.4 to 7.1. This gave my confidence a boost. A funny thing, confidence. With my lack of barbel success I'd been suffering a minor bait crisis. If it hadn't been for occasional chub falling for my usual boilie and paste baits I would have thought there was something wrong with them. Even so, when I moved back into the double crease swim I decided to replace the pellet with a Dynamite Oyster and Mussel boilie - a tub of which had been in my bag for about six months.

About half an hour after dark the rod fishing to the far crease did the repeated spring-back-pull-down thing that indicates a bite when fishing upstream. The result was a five pound chub. Not the barbel I was hoping to end the season with but a reasonable consolation prize.

By eight o'clock I was wondering whether to call it a season or have one more move. The gear was packed and I headed back to the car, knowing there was a banker swim to be passed on the way. Stopping to look at the swim, which was well sheltered, I dropped the gear and carried on to the car for more water to brew up with. I took my time setting my stall out and chose to fish one rod to the snag. For some reason I picked the rod with the O+M boilie on it, put on a fresh bait and a small bag of mixed pellets, then whacked it all out with a six ounce lead attached the twenty or so yards required. Amazingly the lead landed pretty much where I wanted it.

On with the radio, brew made, biscuit half eaten when the rod tip lurched downstream and the baitrunner creaked grudgingly. How I managed to put the biscuit down where it wouldn't fall in the mud I don't know! But I was almost immediately hanging on to the rod as something thrashed on the surface and tried its damnedest to find sanctuary in the tangle of roots and branches. After a few seconds, that some might think of as minutes, I was able to start pumping the fish upstream. I had a horrible feeling that it might be a carp the way it had felt initially, but when a slim, golden shape rolled in the light of my Petzl I knew it was a barbel. "Please don't fall off!"

It had been October when I last hooked a barbel, in the very same swim, and that one had come adrift. This fish was well beaten and slid easily over the net. After weighing and sacking the fish I finished my biscuit and brew, then the trouble started. The usually speedy process of setting up the bulb release on the camera was thwarted. The tube on the release had split where the connector fits, my efforts at cutting back the damaged portion and refitting the connector failing. In part this was due to my increasing frustration at not being able to see what I was doing. Playing the fish and clambering up and down the bank with it had caused me to work up a sweat that was steaming up my glasses. Eventually I had to set up the self timer - when I remembered how it worked. 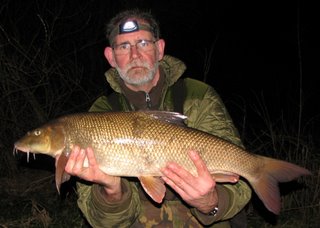 Photos taken It seemed wise to keep an eye on the fish when returning it. Two swims downstream there was a flat ledge at water level that seemed to be ideal. Carrying the fish in the net I walked quickly down to it and made my way to the water's edge. Only one problem, part of the slope down had crumbled away. Not to worry, I could step across it. I dunked the fish in the water, and holding the net pole found a footing. A footing which promptly gave way. I was now straddling the water with no idea how deep it was below me, one foot on dry land the other slowly sliding deeper. At this point the fish was on its own. I cast the net aside as I struggled to cross the gap.

At one point I was clinging to the vegetation on the sheer bank behind me, with one foot in the water over my boot top, the other foot slipping around in mud. After a minute or so I had my right foot firmly across the gap and managed to pull my left foot, which was stuck below the water in mud, out. I was safe. Now I could reach across and get hold of the landing net pole and recover the fish. The ledge I was to release the fish from was narrower than I remembered it, so I had to be careful not to topple in the river. After all that messing around the fish needed no nursing and was fighting to get out of the net! I watched her swim off, then mounted my assault on the bank to get out. The things we do to make sure fish go back okay...

I needed another brew and a rest after all that! Another bait was cast out, although more out of a sense of duty than expectation. By ten o'clock I had recuperated, and it was time to end the season as I was starting to nod and there was a long drive home. It had been a pleasant two days - coming good at a point I could so easily have given up.

The weight of the barbel? It was yet another of my nine pound plussers, well it was a couple of ounces over ten to be exact!
Posted by Dave Lumb at 1:43 pm