A change of plan

The trouble with long Bank Holidays is that they mess up two working weeks. Easter put back a delivery of stock I needed to keep a couple of customers happy by a day, so I had to bring forward my perch session to the Wednesday. Not ideal, but the weather proved to be mild, and for once there was hardly a breath of wind and just light rain showers. Unfortunately the water had coloured up, but I wasn't deterred as was intending to carry on with the lobs and maggot approach. This time I started out by spodding out maggots and chopped worm using a small spod that is easily cast using my single handed lure rod, putting two feeders over the bait with the idea of leaving them out without much recasting in order to reduce disturbance. 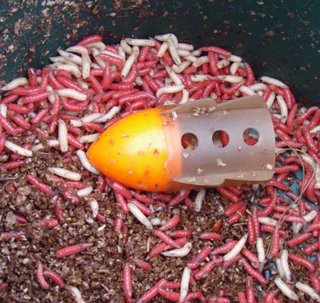 Things started off slowly with just a couple of half hearted bites in the first few hours, and continued that way. It was in the afternoon that things perked up a bit, and a couple of twos made an appearance. One of which looked like a fish I had caught the previous week. There's never as many individual fish as you might think - even when it comes to shoal species like perch. I ended the day with just four perch to show for my efforts. But it sure beat working! 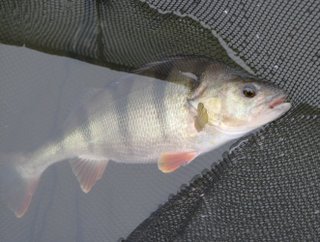 The following day the delivery arrived early and I was able to post the orders and nip out to purchase some maggots. One the way home I called in at a spot on a local canal that I had fished once before for perch - in the early 1990's! I had caught one on a small livebait, fished on a float paternoster up to the stick-ups on the far bank. The area looked just as it had done all those years ago, and with the sun shining and the canal sheltered by a bank of trees it looked, and felt, most inviting. Less than an hour later I was back with the perch rods! 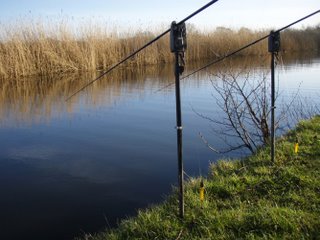 With it being such a bright day I was able to fish until gone seven o'clock. But apart from a couple of tiny lifts on the bobbins, and one slightly more positive one that resulted in a bitten worm, nothing much happened. A spot to note down for further opportunistic sessions though.
Posted by Dave Lumb at 1:54 pm