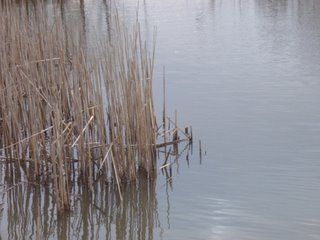 Another afternoon session on the commercial. A more reasonable day with an air temperature of 14C and a moderate breeze enabled me to put plan B into operation. Keep spraying maggots in next to the stickups and fish a worm over them. It took a few hours but around four, as the light was starting to think of fading, I got a couple of twitchy indications to the worm rod. To my surprise the maggot feeder, cast across the bay, had remained unmolested. Eventually the bobbin jiggled up on the worm rod, dropped back then jiggled upwards once more. I struck and something jagged out into open water, headed for the stickups and, as I applied sidestrain, fell off. Had it been a perch? It could have been. The bite certainly wasn't like I'd had from the carp before.

On recasting the twitches started again. This time I pointed the rod directly down the line to see if that would induce a more positive take, and rigged up the maggot rod to fish a lobworm under a float. The float hadn't been out long when the bobbin on the leger rod jiggled and rose again. I connected with something that felt pretty much like the fish I'd lost and for a moment or two I thought it was perch. But when it refused to give up doubt set in. The lack of spines on the dorsal that eventually broke surface confirmed those doubts. Another carp had fooled me. 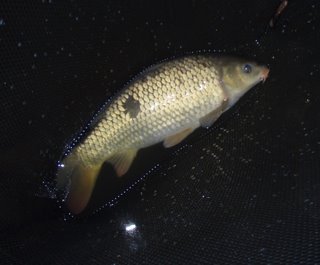 After this, as the light had gone too much for my poor eyes, I hastily re-rigged the maggot feeder and cast it tight to the stickups on the other side of the bay. Within minutes it was away and another carp, slightly larger, hit the net after a brief tussle.

I can see how these fisheries can be appealing. You'd have to work hard to blank, and the small carp fight quite well on light gear. But surely it must get boring after a few sessions? I know I'm heartily sick of catching small carp. The lack of action actually was more enjoyable as the chances of a bite from a perch seemed greater without the constant attentions of carp, and the anticipation level was higher.

Anyway, I can face not catching barbel again now. So that's what I'm going to do next!
Posted by Dave Lumb at 10:06 am