The plan falls into place

On Wednesday I called in to see if the cold snap that had frozen my local canal had done the same to the perch pond. To my surprise it hadn't. Thursday afternoon saw me back there armed with a load of maggots. Although free of ice the water temp was a cool 3.6C on setting up around noon. There was a strongish wind blowing and only one other fool fishing! This guy was on the pole and struggling for a bite. 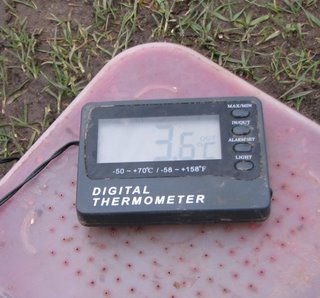 I set out by spraying maggots over the area in front of me and fishing two maggot feeders over them. The guy on the pole packed up in mid afternoon, fishless. It was then that I started to get bites, or at least indications on the bobbins. A small roach was the first fish to make a mistake around 3.45pm. When the light started to fail action picked up and I pulled out of a fish that I think was a perch at twenty past five. Immediately after recasting the other rod was away and a daft carp of four pounds or so landed. I was now getting loads of indications on the bobbins that I put down to carp moving around the feeders. Half an hour later my frail (for me) hooklink parted when the bobbin jammed in the butt ring as another silly cypry picked up the three red maggots. 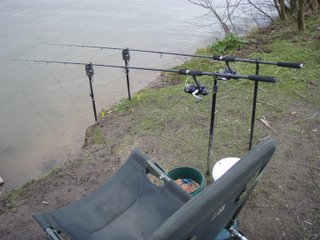 Usually when perch fishing your chances are over once it is too dark to see a float, but at ten past six, headlamp on my head ready to pack up, I hit a bite and connected with something that felt like a bream. Then its big gob appeared on the surface as it started thrashing its head from side to side. Less than two feet from the net cord the hook pulled. "Oh deary me." Or something along those lines... Time to go.

During the afternoon I had been contemplating what to do on Friday as I had the day free. Until that perch made its presence known I was contemplating a pike session. Seeing that open mouth in the light of my head torch changed that, and The Plan was hatched.

The Plan was to return at first light and fish feeders only. No loose feed as I felt that was drawing and holding the carp. Part two of The Plan was to fish maggot on both rods until the day brightened up then ring the changes of methods and baits on one rod until dusk.

Friday started out wet and breezy. So my first job was to get the Aqua brolly up. This turned out to be a wise move. Not because the rain kept up all day, it actually stopped after a couple of hours, but because the wind got quite strong. The brolly helped keep the bobbins still.

The first fish of the day came along just before eight and was a perch that fell for three red maggots. A small roach shortly after, then nothing. I had been getting indications but they dried up. One rod was switched to fish two plastic casters, and within minutes of it being recast a bream took them! Three quarters of an hour later I got another indication on the caster rod. I was fishing bolt-rig style with the bobbin at the top on a tight line and it started jiggling. I fully expected another bream, but it turned out to be a perch! I had caught perch on plastic caster before, but it was still unexpected. An hour later I got another perch on the maggot rod, and twenty minutes after that another on the casters! Ten minutes or so later the maggots produced another perch.

It seemed that the perch were moving in and out of the swim as there would be periods of inactivity between flurries of bobbin activity. During the next lull I swapped the casters to a lob tail which was attacked almost as soon as it settled. But the bites wouldn't develop into anything I was able to hit. I suppose I should have switched to the float, but I'm too lazy for that! Instead I put a whole lob on and extended my banksticks as high as they would go to get as long a drop as possible for the bobbins. This improved matters and I connected with a perch on the lobworm. It fell off half way in. The next one I connected with stayed hooked though. 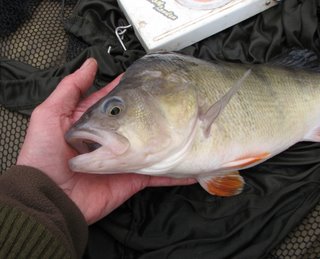 By now it was three o'clock and the day had brightened considerably, but the wind was as strong as ever. I've often come across robins when fishing, and most have been bold and cheeky. The one that lives near the pegs I've been fishing recently is a timid little creature. Although it likes maggots it is reluctant to come too close for them and usually hops off under cover to eat them when it picks them up. 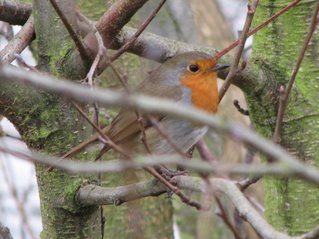 The late afternoon continued with bites coming frequently to maggot and worm, but all fish being hooked on the maggot including a daft carp of seven pounds, and a couple of small skimmers. Although I fished until after six there was no last knockings flurry of perch activity. Well, there was on the worm rod but again nothing I managed to connect with.

The plan had worked and I ended the day tired but happy with ten perch between 1lb 11oz and 2lb 12oz. That'll do me for now on the perch front. I'll maybe return when I have a spare afternoon over the next few weeks before it warms up enough to bring the fishing masses out of hibernation! With a bit of luck the rivers will be warming and I might manage to catch another barbel before the season ends. Here's hoping. 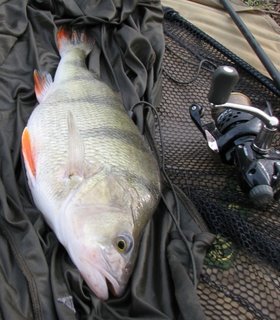