I said that I'd be not catching barbel next time out. And I was right!

The afternoon was one of those February days that lets you know spring isn't far away. There's heat in the sun when it shines during the middle of the day, new growth is starting to poke it's way through the dieback of the winter, buds appearing on the willows. All was right with the world. Even the river looked encouraging with a tinge of colour, obviously on the way down and a confidence inspiring 7.4C.

After walking a stretch for a nosey I had worked up a bit of a sweat, so stripped off fleece and sweatshirt for the walk down the bank with the tackle. I set up in a swim I had fished only briefly before, intending to move after no more than a couple of hours. However, it looked so inviting I stopped into dark because it felt 'right'. After I'd been there an hour or so the downstream rod, fishing a big hair-rigged lump of my 'secret' paste, jagged down sharply and I failed to connect. No doubt a chub. The bait was freshened up and recast. This time slightly further out so I could draw it back to lie under the trailing branches.

Just into dark the tip pulled over and stayed there. There was definitely something on this time and I pumped what seemed like a lifeless lump upstream. Then it carried on past me. Until it broke surface I wasn't sure if it was a lazy barbel (I have had one or two behave like this) or a flappy thing that wasn't flapping. It turned out to be the latter, and an impressive looking fish for a flappy thing. So much so that I dug the tripod out for a self take. I got two half decent shots then it remembered what it was and wouldn't stop flapping. So I put it back. Not quite as big as I had first hoped, but the best fish of the year so far. 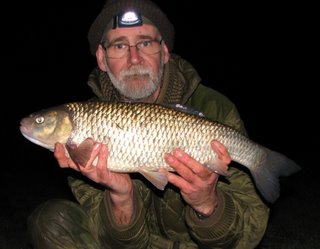 After the disturbance I decided to move. With the sun gone and the sky clear the air temp was plummeting. I gave it an hour and a half in the new swim, having had a few chub bites to the paste and returned to the car to find the air temperature was down to 4C. That would account for the damp on my hat, bunny suit and the rest of my gear. I contemplated an hour or two in a different area, but it was a bit chilly. Of course, half an hour down the road cloud cover rolled in and the temperature shot back up to 9...
Posted by Dave Lumb at 11:32 pm