I had planned to fish tomorrow, but I now have to wait in for the gas man calling. Having got some work done by lunchtime today, and with the weather set to turn wet and cold I threw some gear in the car and headed for... Wait for it... A local commercial fishery!

The place is known to hold some big perch, and I had been meaning to fish it for a year or more, so this was as much a recce for future reference as another chance to try out the Chimera Avon Specialists. There were a couple of blokes pleasure fishing near the car park and three 'youths' carping further round the lake. So I headed for a bay that put them all out of my line of sight! Young carpers never cease to amaze me. Though I should know what to expect by now. The day was dry, the wind light and far from cold, and the lake doesn't allow night fishing. So why did they have a bivvy up? 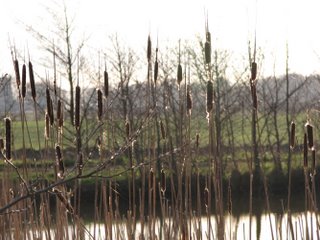 Anyway. I set up two feeder rigs. One a mini-bolt rig to fish two red maggots, and the other a running rig with a longer hooklength to fish worm. In this case two dendrobenas tipped with a single red maggot. The worm rig was dropped close in just off some stick-ups, and the maggot rig cast out into the bay. Fifteen minutes after recasting the worm rod I was glad to have engaged the baitrunner as something was making off at speed. Definitely not a perch take!

Sure enough it was a carpy thing. On the light rod it was quite fun, as it would probably have weighed six or seven pounds. 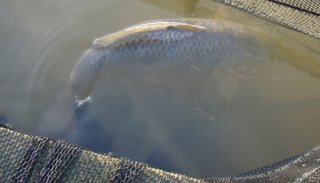 I had a few line bites to both rods and later hooked a smaller carpy thing on the maggots. Only a brief session, but this time I got to have a good chuck with the new rods and they'll cast a 40g feeder as far as I can see me wanting to cast a 40g feeder. The carp also proved that they'll handle decent fish - there was a hint of power in the butt, while the tip and middle is lovely and soft for playing smaller species. Worth the visit for that alone, not to mention the chat with the bailiff about the perch. Apparently I'd picked the swim the lake record had come from!

About an hour before dark the carping youths stunned me again. They packed their rods away then dismantled the bivvy. What's that all about?
Posted by Dave Lumb at 7:10 pm