After blanking on a trip squeezed in between building rods I sought solace in YouTube.

You can't feel miserable after watching that!
Posted by Dave Lumb at 11:43 am

Email ThisBlogThis!Share to TwitterShare to FacebookShare to Pinterest
Labels: entertainment

Christmas looms, so I'm trying to get as much work done in time for the festive season (so I can be miserable and Scrooge-like). This means there'll be no fishing for me this week.

In case any of you give a toss here's a scan of an interview that Anglers Mail cobbled together with me last week. If you're having trouble with insomnia reading it might help... 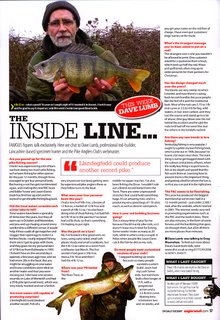 I don't remember saying half of that...
Posted by Dave Lumb at 1:56 pm

For once the weathermen got it right, and I snatched a couple of days before the temperature dropped. Saturday afternoon saw me, pursued by frisky bullocks, heading for the bend I'd looked at last week. It was late on by the time I had done some depth finding with my Smartcast fish finder and scouted out the glide downstream of the bend. Certainly an area worth more attention, and it did look as pikey as I thought in my last blog post. In fact as I retrieved my 3oz gripper lead from my first exploratory cast to check the depth and feel the bottom make up a pike of four five pounds grabbed it! I'd thrown a few small curly shads and a wire trace in the rucksack in case I fancied trying for perch, but not wishing to miss an opportunity for what was obviously an easy pike I cut off the barbel rig and tied on the trace. After a dozen or so casts the lure got nailed, and after a surprisingly lively fight in the fast flow the fish was in the net. 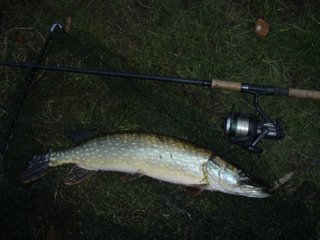 Small but in good nick, apart from a chunk of its upper tail lobe being missing, it was my first pike by design for almost twelve months! 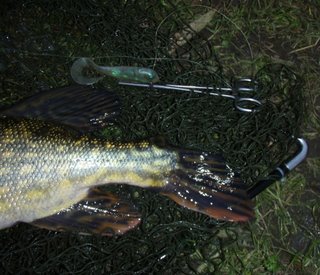 After returning the pike I put the barbel rods out. The air and water temps were encouraging, but the wind was strong and with more than a hint of the north in it, and a little rain. Definitely brolly weather. Not long before dark the upstream rod started tapping out it's chub message and a three pounder was landed. For whatever reason my heart wasn't in it and I packed up at seven to head for a more sheltered spot. The rain showers got heavier after I settled in to the new swim, but apart from an odd chubby rattle that was my lot. It was still a mild 11 degrees when I got in the sleeping bag at eleven.

The river was up a good few inches on last week and carrying more colour so I was confident of a fish or two early doors on the Sunday. But again they failed to materialise. The cloud cover had broken up and although the clearing sky brought sunshine it was still fairly cool. I jacked it in at eleven and decided to head for home. A few miles down the road I changed my mind and called in for a look somewhere else. It was sheltered from the wind, which was easing off anyway, and quite pleasant. More importantly the river looked to be quite well coloured. A quick bacon sandwich in the car park, to the envy of a couple of dog walkers, and I was off down the bank.

The swim I picked to start off in was a sure fire chub swim, a lovely crease with a good depth under the rod top, but I had caught a barbel from above the bush on the opposite side of the river a few months back so I knew they liked the area. Things looked good. I tried to fish a bait to the bush but there was a lot of weed coming downstream, some big clumps too, so both baits had to come in close. Pretty soon a chub came a knocking, but didn't hook itself. However I knew it wouldn't be long before it made the fatal error. Which it did in good style, really banging the rod tip. It was small. About a pound! But it saved a blank!

I made one more move before dark, but as the light faded and the air temperature started to fall I lost what little confidence I had left. I'd tried to make the best of the conditions before they took a turn for the worse as far as barbel are concerned, but failed. Accepting defeat I headed home watching the air temperature plummet from 4.5 to almost zero by the time I pulled off the motorway.

I can't see me fishing again for over a week now for various reasons. What I'll be fishing for next will be decided by the weather.
Posted by Dave Lumb at 10:57 pm

Where have all the barbel gone

My last trip of October resulted in one four pound chub. The water temperature was up on the previous session, but I had missed out on the river rising a bit during the week. That's my excuse. That or poor location. Fished four swims, two I hadn't fished before and learned a bit for the future. So not a total waste.

The same can be said of my first trip for November on a stretch I had been meaning to fish all autumn. Walking the length I found four cracking areas, all different in their own ways. Two look like they'd be worth fishing earlier in the season, but the others have slower flow and more depth. One looks particularly pikey.

The day started foggy but cleared and warmed up. The Trent was plenty warm enough and in the afternoon the chub were active. Only one was caught but I had feared the slower water might be full of the beggars. Just before dark the mist started to rise from the water and hover over the fields. This knocked my confidence as I can't remember catching anything when the river has been shrouded in mist. I fished on until six by which time the landmark I had picked out to use to cut across the field to the gate was invisible! Undeterred I set off to take the long route back following the edge of the river. I hadn't gone far when the mist started to clear and I managed to spot the landmark.

By the time I got to the gate the mist was all but gone, so I dropped in another swim intending to give it a few hours. After less than one the far bank had disappeared from view! So I wrapped up and started the a foggy journey home.

I thought I'd try out the video facility on my pocket digital camera. So here are the edited 'highlights' for your delectation!