I got 'that feeling' again, and found myself loading the car with the barbel gear without realising what I was doing! I half hoped to find the river with some colour in it, but by the look of things it had risen a couple of inches and fallen back. It was as clear as it had been on Monday with willow leaves visible on the bottom in many places.

The plan had been to head for the length I'd fished on my last two trips but a slow moving truck making the right turn I take to get there decided me to head to the next bridge downstream. When I got there I thought I might as well have a walk and suss out the swims on the bank I had yet to fish on the upstream stretch. It was amazingly warm for early October, yet the damp vegetation had the tangy smell of autumn. Everything looked and felt right, so I went back for the tackle.

As usual the plan was to fish swims for half an hour, working back to the car. As usual that plan lasted for two swims then I settled in to the third for a bit longer while I had something to eat. Then a while longer as I listened to The News Quiz, then the Archers... 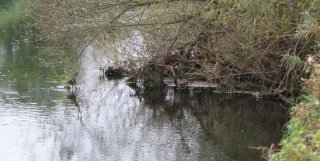 As Fallon was getting ready to declare her love for Ed the tip of my upstream boilie rod, positioned in a clear patch between the streamer weed downstream of a bush, pulled down in no uncertain fashion. I couldn't believe it, as I was sure the 10mm pellet fishing above the next trailing willow would have been the banker as it had already produced a bait-size chub.

As I leant into the fish I realised that I hadn't planned how to land a fish from this swim. I also discovered that it was darker than I'd thought and struggled to see where the fish was. After almost losing my footing altogether I managed to net the barbel and hoist it onto the bank. It was bigger than I'd first imagined. Spot on nine pounds. By the time it was returned I was just in time to catch Fallon being rejected by Ed and storming off in tears. 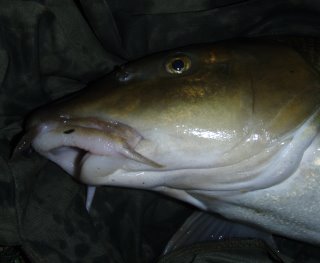 With one fish caught it was worth stopping a little longer. I wasn't able to see where the clear patch was now it was dark, so imagine my surprise when, less than half an hour later, the same rod indicated a few small taps and pulled down again. This felt odd. There was obviously a fish attached but it felt very heavy, and wasn't doing much in the way of pulling back. When it came into sight it was clear why. The lead was festooned with a huge lump of weed. This time the netting process was easier as I knew where to put my feet, but with it being such a warm night the midges were out in force and, attracted by the head torch I had put on, were flying up my nose and in my mouth. Another nine pounder.

I gave it a further hour and a half before moving. The next swim also had a downstream raft to fish to, but was open enough to allow a second bait to be cast out to the far bank bushes. Unfortunately it was too dark to see where I was casting, and having spent a few hours with a bait dangling in mid air a few weeks back I didn't want a repeat performance. So I just cast the pellet out about three quarters of the way across the river, the boilie going downstream to the raft.

The baits had been out about an hour when the raft rod pulled round. Unfortunately the fish fell off after a couple of lunges and I wound in some weed. I rebaited and checked the hook point. It needed touching up. Don't let anyone tell you that chemically sharpened hooks can't be honed back to sharpness. This one was better than it had been when fresh from the packet!

A further hour passed and I needed to relieve myself. No sooner had I turned away than I heard a baitrunner whirring. The same rod was away again, but this time the fish stayed attached and was easily netted, I'd planned things better in this swim! Rebait and recast. Earlier I had wound in the pellet rod only to find the hook buried in weed, the pellet gone and the loop it had been tied on with opened out. I dug out a nylon boilie rig, attached a boilie and a pellet, hooked on a bag of some new magic beans and chucked it out blindly.

It was getting late now so I started to tidy my gear away, removed my superfluous bunny suit so I wouldn't cook on the walk back to the car and then picked up the midstream rod to wind in. It felt like the rig was stuck in weed. Then the weed shook its head and set off downstream. Most peculiar. After a not particularly arduous fight I netted the fourth nine pounder of the session. A fish that had a tumour like growth on the lower lobe of its tail, but otherwise looked as fit as the other three fish. 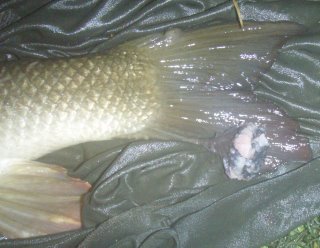 Enough was enough. I packed away the other rod and set off back to the car. The water temperature had been 13 degrees C, and when I looked at the thermometer in the car the air temperature was still reading 15.5 degrees at midnight. No wonder I'd been working up a sweat every time I moved swims or landed a fish.
Posted by Dave Lumb at 10:45 am