It's October, the sun is shining, the postmen are on strike and I'm free to go fishing. Trouble is the rivers are low and as clear as tap water. Thursday saw me making a late start and not expecting anything until gone dark. 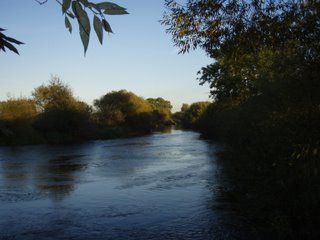 Sure enough nothing did happen in daylight. The river was all but deserted so I planned a bit of swim hopping and was contemplating a move at eight when the downstream rod top pulled round steadily and slowly. Most odd.

There was a fish on, but not doing anything. It continued doing nothing until it got under the rod end. I was hoping it would turn into a lump of a fish at this point but it didn't. What it did do was make one run straight into some trailing branches and get stuck. It then wallowed a few inches below the surface. Pulling on the line did no good, so I slackened off the Baitrunner and left it. The fish took some line which I then wound back on to the reel - and the fish back into the same place it had left. Stalemate. As my landing net wouldn't quite reach the fish I added the spare extension, but it still wasn't quite long enough to get the net under the fish. So I swatted at the branches with the net! While I was doing this I saw the isotope on the rod tip move to point downstream. The fish had come free! Even now it refused to fight and allowed itself to be slid over the net. No leviathan, but a welcome eight pounder under the circumstances.

I had hoped to get a full day in on Friday but again I got sidetracked and arrived at the tidal Trent early in the afternoon, hoping it might have more colour than everywhere else only to find it low, gin clear and with very little flow. 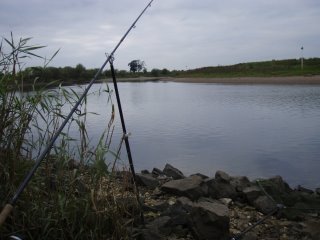 After a couple of hours driving around and walking the banks I decided to get the baits out. I might just as well have come straight home. Feeling decidedly un-hopeful, and having packed an empty gas bottle for my stove, I wrapped in early. I didn't like the company much either.

The postmen won't be back at work until Wednesday so I have a few more days to fill. If only the rivers had some colour in them. Still, if everyone else is staying away because it's a struggle I could be on for a big fish - if I can find one.
Posted by Dave Lumb at 1:57 pm