For some unknown reason I ventured forth last Sunday afternoon to fish a river that was as clear as I expected it to be, and the only activity between dusk and midnight was from rats running around my feet. But despite the weather continuing hot and bright I just had to get out on Wednesday, and decided to fish Thursday too. Quite what drove me on I'm not sure, but it was one of those things where I get my gear ready almost in a daze, and there's no stopping me. It was a good moon phase too - first quarter. While I am confident I can catch barbel any day, the fishing around the first and last quarters of the moon might just be a little easier. If I get 'that feeling' and the moon phase is right, I have to go for it.

The Trent seemed to be carrying a touch of colour, enough to give me confidence in daylight, but it was gone five in the evening, with the sun beating down, before I got some feed out and a bait in the water, in the swim that had considered too swirly last time I was down there.

Within half an hour I had my first fish on the bank, a hard scrapping nine pounder. The next time the rod tried to leap off the rest the culprit proved to be a chub of around three pounds, followed by a bream a little larger not long after. All the action was coming to the downstream rod fished just off an overhanging willow, although the upstream bait was positioned on a nice crease it remained untouched.

Around seven the boilie was away again and a barbel of four or five pounds was soon being unhooked in the margins. Three quarters of an hour later I was weighing an eight pounder, but by now the sky had clouded over and the strong northerly wind was making it feel a lot colder than it really was. By nine o'clock I was considering packing up, but erected the brolly instead. With the wind deflected it became bearable and I stuck it out netting a seven pounder at half-nine. At 10.30 I decided I'd had enough and headed or a secluded spot to get my head down in the back of the car. 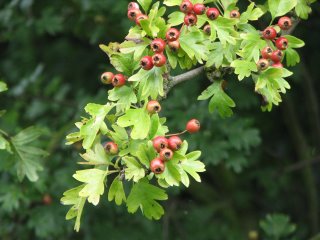 Although it's not quite the end of August the berries have been on the hawthorn for a while now, and some leaves are starting to turn despite the lack of a midsummer heatwave. When I got up shortly after dawn there was a definite hint of autumn in the air. I boiled up the kettle to refill my flask, ate a Mars bar to give me some energy and was fishing by six in the burdock swim.

Amazingly, only thirty minutes after putting in a mix of hemp, pigeon conditioner, sweetcorn and pellets the boilie on the downstream rod was away and I was hanging on to something that was taking line. I knew I had no option but to clamp down because of the fallen willow. There was a grating sensation then the line went slack. I was convinced the line had parted, but it hadn't. The fish had just come adrift. I checked the hooklink and replaced the damaged upper section. I use a two part hooklink with a swivel a few inches from the hook for this reason - among others. A bit more feed went in and a fresh bait was cast out.

I was not over confident of any immediate action, and sat back to watch the sun rising in the sky warming the day up before the wind from yesterday returned. At five past eight history repeated itself, and on autopilot I found myself standing up holding on to a rod bent right round to its full curve while a barbel took line from the reel. This time the fish kited out into the river away from danger so I was able to ease up on it a bit, and after a bit of a tussle it was resting in the folds of the net's mesh. I took some comfort from the fact that it didn't look huge, as it had fought with the same power as the one I'd lost earlier, meaning I hadn't lost a biggie.

Lifting it up the bank in the net it felt, and looked bigger than I'd first imagined, and the needle went past the ten pound mark on the dial of the scales. Had I missed out on a brace of doubles? Not to worry, it still meant that I had achieved one of my targets for the season, an August double - the one remaining month of the season I had failed to catch a barbel of that weight.

I had a few options open to me now. Stay in the burdock swim until after dark, which might produce but could prove tedious and would teach me nothing about the river, or go look elsewhere. I decided on plan B. Packing the gear away at noon, by which time the wind had picked up again, I went back to the car, made a fresh flask of tea and had something hot for lunch before driving off to look for a new swim.

To be honest I almost went back to the burdock swim as what I found was not all that promising, but I set up above a weed raft and soon started getting a few chub knocks. However, I wasn't happy, and after a while moved below the tree and fished the crease downstream. Albeit with little confidence. Why Trent chub imitate barbel bites and Ribble chub rarely do I haven't a clue, but for a brief moment just before five thirty I thought I had hooked a small barbel. This turned out to be a chub of 4lb 11oz. I also caught a couple more chub on the boilie rod, one of which might have made six ounces, and the other maybe half that again! Come nine o'clock I'd had enough. The swim had no barbel magic and I decided I might as well head home and get a reasonably early night.
Posted by Dave Lumb at 1:27 pm