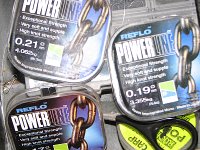 To fill in the gaps between fishing session reports (which may become a bit thin on the ground for a while) I thought I'd start reviewing tackle and other stuff that I've been impressed with. So here goes.

I was first told about Reflo Powerline from Preston Innovations last year when I was tench fishing, but didn't get round to trying it out for myself. That was why I used it for the first time during my brief perch fishing campaign and liked it. Since then I have been using it for tench and bream and been well suited with it.

It knots well with the knotless knot, four turn Uni-knot and even with a figure of eight loop (which is the knot I use for making up hooklinks when the length needs to be carefully controlled). What I like about Reflo Powerline is that it is clear and limp. Frankly I don't know what all the fuss is about fluorocarbons - I can't see Reflo any easier than fluoros when I drop a rig in the margins, so given its ease of use and reliability I'll be sticking with it.

For the perch I used it in 0.15mm for worm and maggot fishing, in the 0.19mm for fake casters on a #16 hook for tench and the 0.21mm for tench and bream with a #14 or larger. It's a pity it isn't available in thicker gauges still as I would be tempted to try it for barbel if it was.
Posted by Dave Lumb at 12:30 pm