Although I prefer using braid for some of my fishing there are situations where I don't think it gives any real advantage over nylon mono. For stillwater legering I am more than happy to use mono, for example. In the past I have used Sylcast, Berkley Big Game and Daiwa Sensor with confidence. All cheap and reliable, but also all a bit on the 'wiry' side. Using braid a lot does let you see the benefit of a limp line's handling properties.

When a customer brought a rigged up rod along for me to look at with regard a rebuild I noticed the line on his reel was a nice pale green colour and very limp. It was Infinity Duo, which actually has a two tone green/black effect to it. At the first opportunity I bought a spool of the same diameter as the Sensor I had been using for tench fishing last year - 0.31mm.

After a couple of sessions I decided to re-spool with the next diameter down, 0.285mm rated at 12lb. Still plenty strong enough for tench and bream, but more supple still owing to the finer diameter compared to the 0.33mm line. 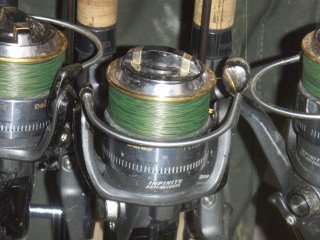 Despite having seen reports that Duo is prone to line twist I really cannot say that it has been any worse than any other mono I have used. There may be some truth in the story that line twist in Duo appears worse than other lines because of its split colouring making the twist more visually obvious. In practice I haven't had as many problems with line wrapping round rod tips or curling up on itself when allowed to go slack as I had with Sensor in the past.

In use I have found Duo to be easy to knot, to cast well off the spool and, although not used in the most testing of environments, to be reasonably abrasion resistant having stood up to fishing in weedy tench swims. Not as cheap as Sensor, but a nicer line to use, and reliable.

PS - 23/08/08
While this line in the 0.285mm didn't let me down in 2007 I have experienced some unexplained knot failures in 2008 with the 0.26mm which I had been using for tench fishing with no problems (landing some nice fish). Out of the blue I lost two fish on the stuff while applying very little pressure. Spooling up with the 0.285mm I had no further problems. It has been known for some lines to suddenly become unreliable, maybe Duo is one of them. Or possibly more line needs cutting back at the start of each session than I had been doing.

PPS - 22/03/09
I have since heard of other people having similar unexplained failures with this line. Fine when new, but untrustworthy after some use.
Posted by Dave Lumb at 1:54 pm