A mixed bag - of fish and weather

I was in two minds about this session. The rivers had opened the day before and were up and coloured. Barbel would be feeding. However I had one of those indefinable feelings telling me to go tenching again. The weather forecast was not great, with heavy showers and prolonged spells of rain forecast over the next couple of days, even though it was a glorious summer's afternoon as I headed south and remained pleasantly warm as I settled into my chosen swim.

Swim selection had also been the result of a hunch, it being one I hadn't fished before, but it felt right. A small roach/bream hybrid took a couple of plastic casters almost straight away, but by the time it went dark nothing else had happened. As night fell so did the forecast rain, which, although not heavy, lasted all night. The only action to the rods during darkness being an occasional line bite or tufty activity.

Dawn broke calm and dry but it wasn't until six o'clock that a positive bite registered. The method feeder rod tore off and a tench was hooked, only for it to fall off when it hit a patch of weed. The hook came back draped in Canadian pondweed and a small piece of plastic bag. After that bream started showing up, not large, the biggest being around the six pound mark, but they came along at intervals during the day. At quarter past ten, after a couple of bream had been landed on the double caster/maggot feeder rod the corn on the method rod was away again and a six pound tench safely landed.

Around one o'clock the first of the showers arrived right on cue after a few fish had rolled in my swim. I had switched to two method feeders by now, both fishing two grains of plastic corn, as that seemed to be the going method to catch the tench. For what it's worth the mix I was using consisted of hemp, molasses meal, assorted 4mm and 6mm halibut and Sonu feed pellets bound together with p.v.1 binder.

By two o'clock it was raining hard enough for me to be willing the bobbins to remain still when the one on the caster rod started doing its up-and-down going-nowhere bream dance. The rain was pounding on the brolly so hard I couldn't hear the Delkim! I threw on my jacket and landed the fish as quickly as possible, recasting an empty feeder just so I could dive back under cover. But as I reset the indicator I noticed that the bobbin on the middle method rod was up to the top and the line as taut as a bowstring. Again I had heard nothing. The bream had obviously moved in.

On picking the rod up the fish was weeded but steady pressure got it moving towards me. A couple of thumps told me the fish was still on and I wasn't just dragging a ball of weed in. Two more thumps and the 'bream' came free, took a bit of line and kited to my left. Ooops. It was a tench! Standing out in the lake in my waders with the rain lashing into me would not have made for the traditional tench fishing scene. Again the hook held, and after a good scrap my biggest fish off the water so far was in the net. 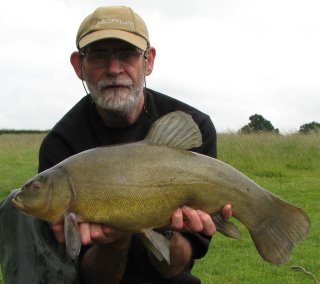 Such was the changeable nature of the weather that by the time I had the fish weighed and ready for the snaps the sun was shining, and as soon as the fish was returned it was hot enough to get my damp gear dried out!

The rest of the afternoon was quiet, apart from the unusual, to me at least, experience of catching two perch on fake casters. One weighed in at 1lb 12oz. The amount of fry to be seen in the margins explained the presence of the perch. Maybe I should have put a worm out to see if there were any bigger ones around. 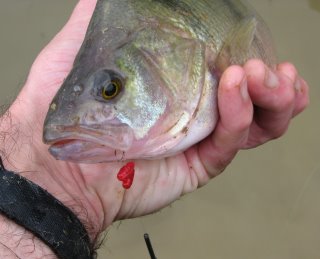 The afternoon turned into a glorious evening and brought the bream which showed at intervals into dark. An hour or so before dark I had swapped the maggot feeder for a straight leger with two 10mm boilies, and just before 10 o'clock something made off with them at a rate of knots. How I failed to hook it was mystery. A little doubt crept in over this, was the hair too long? A bream shortly after and a roach/bream hybrid of 4lb 11oz at 1 o'clock set my mind at rest on that score. 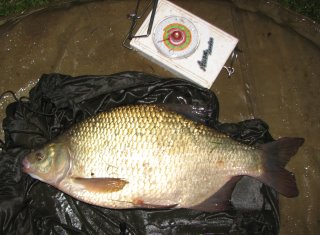 The following dawn was more like you would expect at this time of year, flat calm with wisps of mist rolling over the surface of the water. Again the tench refused to roll and bubble to complete the picture. It wasn't until 5.40 am that the final tench of the session made an appearance, a five pounder that was in a rather sorry state around the vent. I caught up on some sleep and packed away my gear as the midday shipping forecast interrupted the commentary from the fourth test.
Posted by Dave Lumb at 10:18 pm