It's not what you do, but where you do it.

This time last year I took up an offer of some tench fishing on a southern gravel pit, and came away with a new PB, beating the one I had caught a few days earlier on another water. They say you should never go back, but another invite was forthcoming and off I went - to discover the tench fishing had slowed down, but some decent bream had been showing up.

The swim I had been told to head for was taken but the carp anglers were helpful when they knew I was after tench and I headed for another swim at the same end of the lake. Tench started showing almost immediately and I had soon located a nice hard patch not too far out. Apparently a maggot feeder approach had been sorting the tench out, so I started out with one rod on that, with three red maggots on the hook, and a method feeder with my trusty grains of plastic corn on the other rod. Half a dozen small spodsfull of hemp went out and I sat back. The tench continued to show but the bobbins remained inactive.

As darkness fell an eel of about a pound took the maggots, so that rod was switched to another method feeder, but with a single plastic pellet on the hair. At half past eleven the corn rod tried to spring into life, but as it was a bream that had picked up the 'corn' it wasn't exactly hyper. The dead weight on the end of the line told it's story, a couple of tail slaps as it neared the net and I had my first double in the net. In the past I had scoffed at people fishing for bream, but now I could see the attraction. When they get to that sort of size they look like another species.

The next time an alarm sounded it was a proper screamer, and at two in the morning it was a bit of a shock. Unfortunately the hook point made contact with the pellet and I failed to hook the fish.

At dawn the tench were rolling and tail slapping again, so the maggot feeder went back out, this time with two plastic casters on the hair. I do like these plastic baits. However it was the corn that was off again, and a hard scrapping seven pounder, the deepest bodied tench I have ever seen, was netted and returned. I didn't bother with a photo as the way the tench were rolling in the area I was sure more would be following soon. Well, if more than twelve hours later is soon, one did!

Having a chat and a cup of tea with my host when he called to see me after work the casters headed for the hills. This tench fought harder than the first one, and I was concerned about the hold the size 16 hook had. Rightly so as it fell out in the net. In the sling and weighed it was a new personal best by two ounces. 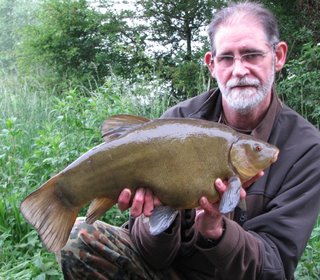 As you can see above, I let some old bloke hold it for the photograph...

Despite more tench activity on the surface the infuriating fish would not pick up my baits. So, in preparation for some more bream activity I again rigged up two method feeders and lay back for some sleep. I was awoken around two by a very dodgy take to the corn rod, and it was like Groundhog Day as the perfect twin, to the ounce, of the first night's bream was netted. This time I made a slightly better job of the photos, though.

The final morning dawned damp, and again tench were everywhere. Only one small one deigned to pick up one of my artificial offerings, and picking a lull in the rain I packed up and headed for the water I have been fishing since April.

Talking to the anglers already there things had gone from bad to worse and very little action was being had - although one bloke I was talking to as he set up stall had fish rolling all over the place in front of him. I chose to head for a swim that, although usually popular, hadn't been fished for some weeks. As soon as I had my baits out a good tench rolled over them. More visual signs of tench followed before dark and at dawn, more so than usual on this venue, but take my baits they would not. A move was called for and a chat with other anglers to see what had been occurring. Not a lot. The guy who had a swim full of tench had not had a sniff! What to do? Pick a swim with no tench activity?

I set up away from the rolling fish, but not too far away,and put out some bait again. Felt confident. Saw tench over the bait. And blanked. The following morning dawned foggy, and when it lifted and the chill went from the air I called it quits. Just goes to show that you have to be on feeding fish to catch them.
Posted by Dave Lumb at 7:50 pm