Ol' red eyes is back 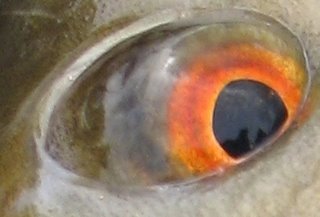 Would it be third time lucky? The plan for this session was to do an extra night in the hope that this might give the tench more time to find the bait.

As there didn't seem to have been loads of fish caught since my last visit and no areas producing numbers of tench I decided to fish a swim that hadn't seen much attention. If they weren't in the 'hot swims' they had to be somewhere else.

Apart from a few single bleeps the first two nights passed without event. Then, as forecast on the Saturday afternoon the wind swung round from a not too cool north-easterly to a mild south westerly - blowing into my bank at an angle. When the wind died before dusk I spied bubbles out of casting range. I've seen them there before, so perhaps there is some sort of feeding station out there. More importantly as I was looking at the bubbles through my binoculars a tench rolled in my line of sight - right over my bait! With it being warmer, and a tench having rolled my confidence level rose a good few notches.

As darkness fell all was quiet. No bleeps. Nothing. And I dozed off. At half one the right hand alarm woke me, as something made off with the 10mm boilie. The fight was unspectacular and the few nodding thumps suggested a bream, but nope. It was a tench. Not massive, but a six pounder in great condition would do me as a first tench of the year.

The rest of the night passed without event and I awoke before the alarm and recast all three rods at five thirty after a Mars bar and brew to kick me into life. As dawn broke the wind strength gradually increased until the margins began to colour up. I had planned to fish until noon, but despite my confidence for the morning nothing had happened by ten so I decided to start a slow pack up. I'd got everything in the car beside the rods, alarms and net and was strapping the marker rod into the quiver the right hand rod was away again. This was definitiely a tench, but half way in the fish fell off. Bugger! 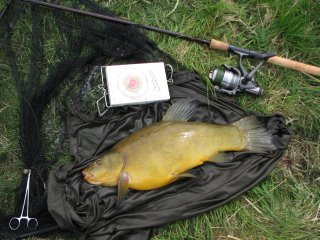 What to do? It had to be worth another hour so a fresh bait went out. After half an hour something was niggling - I hadn't put the bag of 'magic beans' on the hook. I wound the bait in, changed the boilie, added the 'magic beans' and recast.

The wind had now picked up more strength and swung round more to the west and was blowing straight at me. Maybe fifteen minutes after recasting the boilie rod was in action for a third time. The 'beans' had worked their magic again. This fish put up a decent scrap, and I was surprised when it weighed in just over six pounds. Yet another lovely looking, yellow-bellied, tench.

I gave it another half hour or so, and while I'm sure more fish could have been caught, pressing matters demanded I head for home.

The 'magic beans'? Hmmm. I reckon it was the wind that brought the fish over and put them on the prod. Although all three runs had come to the 'beans'...
Posted by Dave Lumb at 6:28 pm