When you are blanking it's all too easy to stay at home when you really should be out there doing it. Conversely when you have had a good session you will move heaven and earth to get back and do it again. After my last session I was definitely in the latter mode. I had hoped to get away on Wednesday and return home on Friday as I had to be somewhere on Saturday morning, but Wednesday didn't pan out. Either I could do an overnighter Thursday-to-Friday or fish through until early Saturday morning. I decided to push my luck.

There was fairly strong north-westerly pushing down the lake, and fish had been caught close to where I had caught last time. So I set up on the downwind side of the willow and fished baits on the edge of the mudline being created off the point to my right. It didn't take long before tench number one made off with a couple of grains of fake corn on the method feeder rod. A male with a rather tatty tail. 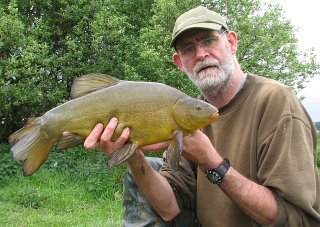 Before dark two more fish were landed including a seven pounder which picked up two fake casters on the maggot feeder. 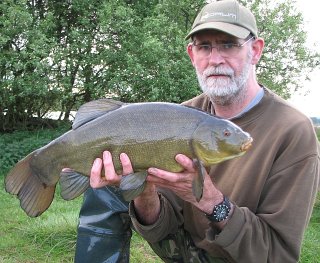 For some reason this rig is proving my least effective, although it does catch an occasional fish. The night was pretty quiet, apart from the obligatory two o'clock four pound bream. Then just as daylight was starting to make an appearance the boilie rod was away resulting in another seven pounder, and as I was rebaiting the hair something made off with the method fished corn. Two fish in ten minutes and then nothing until half nine when I suffered a hook pull after playing a fish for a reasonable length of time. Having only just changed the hook (because a pike had bitten off the original hooklink) I was cursing the different pattern I had used. 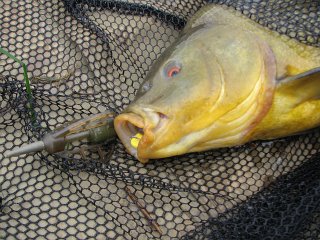 I needn't have worried as two more fish were successfully landed on it later in the day, although the afternoon was quiet, a last fish of the day took a boilie at quarter to ten. Around noon the wind had swung round to the west and intensified producing far from traditional tench conditions. 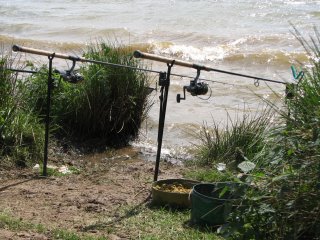 I like a decent wave when I'm tench fishing, but this westerly was cold and so was the ensuing night - certainly compared to Thursday night which was positively balmy. In truth I wasn't too confident, and sure enough only one bleep from the alarms troubled my slumber. Despite Saturday dawning with a lighter wind and sunshine no early morning feeders made their presence known, and as I left for home another angler reported that sport had dried up for him when the wind had picked up, having had only one run (which slipped the hook) in almost 24 hours.

Having ended the session with nine tench you can bet that I'll be trying to get through my work early this week so I can head back for another session while they are feeding. The females are starting to fill out, and a big fish could be on the cards over the next couple of weeks.
Posted by Dave Lumb at 10:45 pm