Madness in my method

Travelling 150 miles to fish an overnight session might not be the action of a rational man, but my excuse was that I had a meeting to attend in the general vicinity. Sort of. For once the weather forecast was spot on, and the afternoon turned to rain - so I sat in the car for an hour or so waiting for it to ease off as promised. For once my first job was to get the brolly up to keep the gear dry, then after a quick bit of plumbing three rods were baited and fishing by half five. The evening was turning out nice, the wind swinging round to the south-west and dropping in strength as the sun shone.

The plan was to fish without spodding a bed of bait out and to use a mesh bag of 'magic beans' on the boilie rod, a maggot feeder in conjunction with two fake casters and a method feeder with one sinking and one floating grain of fake corn popped up slightly. The three rigs were cast out in a staggered pattern with the furthest one being in six feet, and the others progressively shallower. All lines were marked with orange Dacron fly-line backing. On casting out I feather the line as soon as I hear/feel the marker go through the rings. No need for clipping up.

Within an hour the caster rod was away and I was playing a male tench of over five and a half pounds. Unbelievable - so little effort and an almost instant result! As I was sorting the fish out another tench slapped its tail close to my baits. The next bait to get picked up was the double corn and another male an ounce lighter was landed at 8.30pm. 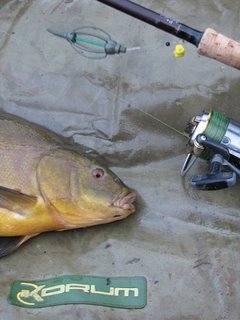 As darkness fell I rebaited and recast for the night. With cloud cover moving in the night was pleasantly mild, and I recast the two feeder rods a few times before getting in the sleeping bag and nodding off. Just before midnight the method rod was away again this time it was a six pound female tench. A bream of around four pounds picked up the same bait around quarter to two, but then all went quiet and by dawn there was a snail creeping along one of my rods in search of a lump of method mix! 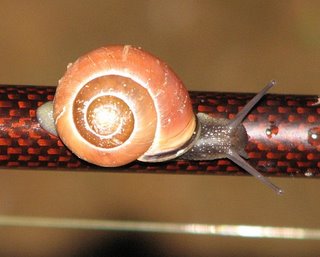 After a brew it was time for rebaiting again at 5am. Shortly after six the method rod was away yet again and my biggest tench of the season so far was in the net. A battle-scarred almost two-tone female that had clearly yet to fill out with spawn. 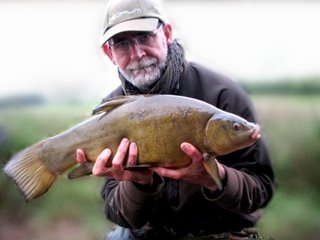 By now the wind had dropped to nothing and drizzle set in. I had a horrible feeling that the wind was going to pick up from a fresh direction and blow straight into the brolly. I was right. It did. I hadn't turned the brolly round in advance and everything got soaked as I uprooted it in the rain. I waited for a break in the rain and made my escape. For once driving north saw the sun breaking through and I soon got all my gear dried out when I got home!
Posted by Dave Lumb at 5:53 pm