Bump - back down to earth

Armed with my successful new tactics, brimming with confidence and encouraged by the weather I was back again for three, maybe four nights of tench packed fishing. The wind direction suggested that the tench should still be in the same place as last week, and although I actually hoped to get a different swim the one I fancied was already occupied and I settled into the one I had fished last week. Baits out by five o'clock and it was only a matter of time before the tench would start crawling up the rods. 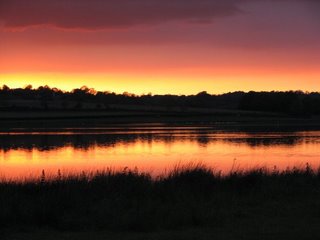 Despite an almost perfect sunset it was dark by the time a five pound male tried to eat my fake corn at 10.25. As it was bound to be the first of many more tench I didn't bother with a photo, and I didn't bother taking a picture of the small roach/bream hybrid that picked the same bait up at four am, nor the tufty that had expressed a liking for a fake pellet half an hour earlier. Something was bound to happen during the morning, and it did. A pike snaffled the corn on the way in, and nearly made it to the net before it bit through the hooklink. Nothing else showed any interest in my baits until I decided on a move at eight the following morning when a pike of four or five pounds nailed a 10mm boilie as I began to wind it in. This one was hooked in the scissors and was safely landed and returned. 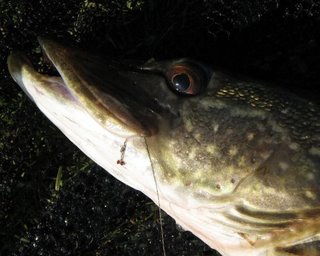 I had two areas in mind for the move, and despite expecting a late arrival to have nabbed my first choice swim it was still free. The angler was fishing twenty or thirty yards from it and had just returned a tench as I approached. My mind made up I set up in swim choice one. After a few hours someone in the area I had marked down as choice number two landed a fish. Not to worry, things were still looking good. The afternoon was pleasant and it felt like a take could be imminent at any time. In area choice two it was, as I saw another fish landed... Dusk arrived, a tench rolled, and the wind swung round into the brolly, bringing a little drizzle with it, so I turned it round. Cosy again, I settled in for the night staring at the motionless isotopes.

Then the wind swung back where it had started from and brought more drizzle of a heavier nature. I moved the brolly back just before the drizzle became rain. Just after midnight, during a dry spell, I got a drop back that was the result of a liner. On recasting there was a tentative take on the corn and I lifted into an obvious bream. 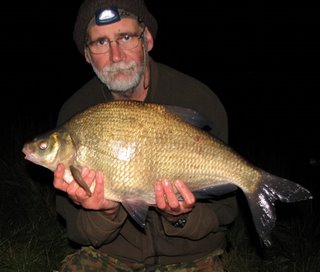 For once it wasn't a skimmer, and although it wasn't a monster it was the biggest I had ever hooked so it got it's photo taken in the dark - in more rain. Shortly after recasting I had another line bite which I ignored. Every so often until dawn I would be woken by yet another liner on the same rod. Somehow I rather suspected that a smallish bream had hung itself - so it proved when I decided to rebait and recast the rods in daylight when the rain had cleared.

A nice ripple on the water as the sun rose and the day warmed up should surely have heralded tench activity. But no. Not a sniff. Deciding to call it quits I was on the road home by half past twelve. A few days of work will ensue to reappraise the situation and plan the next part of the campaign after this minor setback.
Posted by Dave Lumb at 7:20 pm