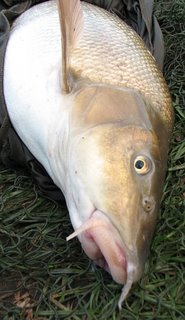 Not much fishing done following the previous blog. Two short evening sessions on my local River Ribble with one small chub (which is harder to achieve than a big chub on the Ribble) and a lost fish of undetermined species that cut me off as soon as it took the bait. So it was all the eggs in one basket for a final three day trip to the Trent. Given the cold snaps that had arrived just in time to kibosh the end of the previous two river seasons things were looking good. I wasn't going to freeze or get soaked by rain either - which is always a bonus when sleeping at 'Hotel Astra'.

The river had been well up the previous week but was only a couple of foot up, if that, and clearing. The air temp was around 13c and the water over 8c. Arriving at half one I called in at the stretch I had been having most success on and was surprised how few were fishing. Only three cars parked up, maybe I should have fished but I wanted to check out a couple more stretches with a view to next season. At the second one I decided to fish the evening. Losing a lead on the second plumbing cast should have been an omen, but like a fool I fished the swim anyway.

I was soon losing a lead a cast on the upstream rod, while the downstream rod was coming in clean, and getting knocks and rattles. So I dropped down a peg to ensure that I'd have enough leads to get me through to the last day of the season! Eventually the upstream rod produced a fish. Not that it had much to beat the 6lb bream was still a personal best. A four pound chub to the downstream rod followed, but despite bites continuing I called it a night early as I was still losing an occasional lead.

The following morning I was on the stretch that had been good to me this season, and lost two fish almost immediately - one to a cut hooklink and the other just fell off. It wasn't long before the pegs were filling up with anglers - which has the benefit of showing you where the fish are stacked up. Sure enough there were two anglers doing better than the rest in terms of hooking fish if nothing else. One in particular was getting plenty of takes and losing the fish in a snag. The angler below him had a few, including the biggest of the day at 11-12*.

I did better than the rest, not losing any more fish and ending up with three four pound plus chub and barbel of sixish, eight and a half, and nine pounds nine. Despite the air temperature the day had been quite cool thanks to the wind chill factor. The river was dropping initially, then rose an inch in the afternoon, which was odd, but a confidence inspiring 8.5c.

Plan A had been to spend the third day on a new stretch - which is a bit of a wild card to play but I had caught a March barbel at last and that had been my primary aim for the trip. Plan B was hatched - get in the hot swim and try not to lose any fish! Plan C was to play it by ear, and if the fishing was poor go look at the 'new' area for the last few hours into dark.

Old piking habits of getting to the water well before light die hard, so I got the swim I wanted. History repeated itself and I promptly lost a fish to a cut hooklink, and then had one fall off! Surprisingly few anglers turned up for the final day of the season. I know one bloke who fished elsewhere because he expected it to be rammed out where I was - I guess a lot of people thought the same.

What a change the lack of wind made. With the sun out it was just like spring, but as the breeze picked up in the afternoon it cooled a bit, but was still pleasantly mild, and the water temperature was on the rise.

The first fish was a small chub, which proved to be the first of eight in the three to four pound range that I caught. The second fish was a barbel which I didn't weigh that looked about seven pounds - until I weighed the next fish that was seven and a half and smaller than the first one! The fish were coming fairly steadily, but (as is often the case) in bursts through the day. Get one and another might come shortly after.

At a few minutes past four I landed a barbel of 7lb 10oz , rebaited and recast, tried to sit down and got a chub. I returned that, rebaited and recast and the same thing happened. The next cast stayed put for long enough for me to start on a pork pie before the rod tip started bouncing as another member of the chub shoal started dragging the big lead downstream. Only this time the chub pulled back and got heavier when it hit the mid river flow. Obviously it was a barbel. And when it swam upstream of me as I got it close in I thought it might be a good one. Despite the colour clearing from the water visibility was not great, so it was only when the fish rolled that I knew I wanted it in the net quickly. I'm always impressed by the 'shoulders' that barbel develop as they get bigger, and the width of the belly you see when they roll ready for the net. A definite double it felt heavier than I expected when I broke the landing net pole down to carry it up the bank. 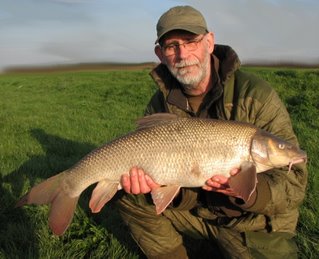 Thinking in terms of twelve pounds or so, I was pleasantly surprised to see the needle spin round past thirteen on the dial, and on some seven ounces past my previous biggest barbel's weight. No doubt the fish had graced a few other lucky anglers nets in the past*, but it had never seen the inside of mine before so I wasn't complaining!

Apart from a few chub I think there was only one other barbel caught on the length. How come? I think the fish must have been packed fairly tight and I was on them. It did seem quite critical where my rig landed. Despite fishing on into dark the only other two bites resulted in another cut off hook length, and another of the chub. Time to call it a season. A season that had ended with a bang rather than the expected whimper.

It's not often a new hat isn't a jinx - maybe my ploy of carrying it in the rucksack for a few weeks with the old one allowed some luck to rub off on it?