I was a bit under prepared for my first perch session. So when I decided not to rest on my laurels and have another go, with a more considered approach, I was convinced that my efforts would go unrewarded.

The plan was to fish red maggots in a feeder, with lob worm on the hook. I had used the feeder tactic to good effect many years ago when fishing small deadbaits for perch so thought it might work. I started out with one rod on the feeder and another on the float, but when the feeder produced a fish early on I soon put a second feeder rod out. It was no trouble getting bites, but hooking them was another matter. The morning saw two fish landed, and about a dozen good bites missed. Hitting the initial twitch of the bobbin didn't work, and letting it hit the butt ring simply saw it falling straight back. 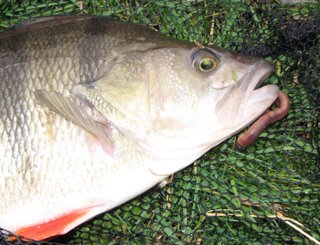 As has often been the case when perch fishing bites would come at intervals. A flurry of activity lasting ten or fifteen minutes would be followed by up to an hour of nothing. A fine example of this was when a mate phoned me up during a lull. As I moaned about my frustration one of the bobbins dropped back sharply and I connected with a fish - as I hastily rang off and threw the phone on the grass! No sooner had I recast than I hooked a decent fish on the other rod, which dropped off half way back. Almost immediately that bait was cast out again it was taken and a two pounder landed. Then it went dead.

Another hectic period in the middle of the afternoon saw the perch pulling the line from my fingers as I tried to set the bobbin, or taking the indicator right up and banging the rod tip - all resulting in hooked fish! As the day drew on their behaviour reverted to that of the morning with me tearing my hair out at unmissable bites that I missed.

At one point I tried a bunch of red maggots popped up with a bit of red rig foam. One fish of a pound or so was caught, but the worm rod was getting more action. So I gave the idea up, despite the fact the perch were eating the maggots as one coughed a few up in the landing net. 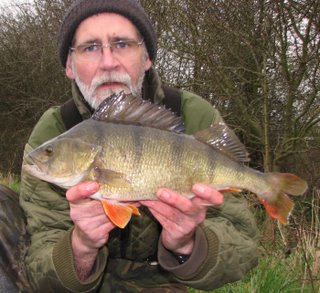 The final tally for the day was ten perch - although I must have had three times that many bites. With two of the fish going over three pounds I'd had a good day.
Posted by Dave Lumb at 1:52 pm