Should I stay or should I go?

Yet again I started off on my 'old' stretch of the Trent on a mild and dry afternoon, with a south westerly taking some of the warmth away. The river was in good nick, a couple of feet up and coloured with a temp of 6.8c. As my previous sessions in the usually productive swims had failed I thought I'd try downstream. There is a small, slightly slacker area I'd been meaning to try, but with the level as it was it proved to be a bit awkward to fish. Nonetheless I got a few droppers of pellets and hemp in (before losing the dropper) and set up. I fished for about three hours without a bite, the only signs of fish in the area being a chub of around three pounds feeding a couple of feet from the bank.

As the swim was a little precarious, and rather slippy, I decided to find somewhere more stable to fish into dark.

Down to the cattle drink and almost immediately the chub made their presence known. Rattling the rod tips and biting boilies in half. As it went dark the activity slowed, and then the rain started. Only a light drizzle really, but noisy on the brolly. Only one chub managed to hook itself, a fish of three pounds or so, and then a bream was found on the end of one line when I came to pack up at quarter to nine.

I can't weigh up what's happened to this stretch. I'm not the only one who has noticed it fishing poorly this season. Maybe the barbel have moved? Or perhaps it's down to the weather patterns and they haven't moved into the area in the first place. Who knows. The plan for day two was obvious. Hit the stretch that was producing.

Setting up in the dark at six thirty I wasn't 100% happy with the swim I had selected. Although I could have picked anywhere on the stretch, and my plan the night before had been to drop in the next peg downstream, something made me settle where I did. However, I snagged my downstream rod on the first chuck, losing the hooklink, and decided to have a lead around. After doing so I started to move my gear the few yards down to the next peg where the flow was less turbulent. I'd got everything in place bar the upstream rod and the landing net. As I threw the net up the bank the rod started bouncing. Fish on. A seven pounder was landed and my mind made up. Don't move off fish!

The gear was soon back in the initial choice of swim and two baits in the water. Half an hour later one of the regulars turned up and was saying how he'd been fishing the stretch for six years and never had a double. As he walked off to set up his gear the upstream rod tip pulled down and sprang back, doing this again and again as something dragged the six ounce lead downstream. The fish didn't fight particularly hard, but had weight to it. The shoulders told their own story and as matey came to have a look I had just recorded a weight of 10lb 10oz.

The day's prospects were looking good. 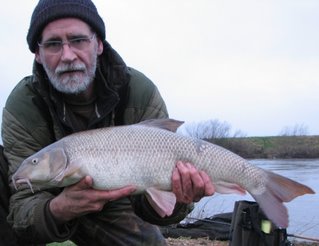 The rain had cleared up well before dawn and the wind had dropped. It was lovely, if grey, February day with hints of spring as the larks ascended and the tits flitted through the far bank willows. The fish, on the other hand, did a disappearing act. A small chub came along at half past eight then nothing. The water temperature was rising. the river falling slowly. Conditions seemed perfect.

I usually have a tin of Spam in the bag (although it rarely gets opened) but for once I decided to stick a lump out in the slower water. A cube was put on a hair spring, and a stringer of five our six cubes attached to the hook. I was amazed when the new 2lb Torrix fishing the meat slammed over and the Daiwa baitrunner started to spin. I was even more surprised when it turned out to be a chub that had got my adrenalin flowing! A reasonable one too, at 5lb 4oz.

That was the first decent fish I've had on the Torrix, and it proved my suspicions that it's not a barbel rod for me - but should be great for the tench and bream fishing I intend it for.

That happened at 12.45 and nothing else occurred until I wound in a small bream/roach hybrid at quarter past five. The overnight rain must have had some impact higher up the river as the level started to rise in mid afternoon. Maybe this had a negative effect on the fish. I fished until dark, fully expecting a last minute fish. It didn't happen. When it went quiet after the chub I started to get the urge to move - especially as the only other fish caught by the other two anglers there was a small barbel, but dusk has often been productive on that stretch so I stuck it out. Maybe I should have moved off fish after all?
Posted by Dave Lumb at 9:36 am