They say that good anglers are not patient. That they are always thinking of how to get that next bite or to find a way to turn a blank into a successful session. On days when nothing you do seems to make a difference it can be a good idea to reign in your impatience, make a decision and stick with it.

I find that in low water temperatures you can be better waiting for the barbel to find your bait than trying to attract them by a regular trickle of feed. There are those who say you should cut back on feed in winter to avoid overfeeding the barbel, but I'm not sure that's how it works. I have a feeling that they are capable of seeking out the bait just as easily as they can in warmer water, but don't rush to get to it when the water is cold. So why plonk a little pile of feed out and move your bait away from it before a fish has found it? Casting a bait out with a small amount of feed around it and leaving it there for as long as possible (at least an hour), provided it's been cast to a spot that is likely to produce a take, has produced a fair few decent fish for me during the winter.

Having set off from home at four in the morning to start fishing at seven in constant rain and a strong wind, the Trent looked good. Three foot or more up, nicely coloured and warm enough at 7.5c - actually rising to 7.6c as the day wore on with the air temperature over 12c at dawn.

Not much happened, nothing in fact, despite the usual trick of casting baits around the swim to try and locate a fish or two. I was fishing a swim I had taken an eight pounder from on the first cast a couple of weeks earlier. So one bait was repeatedly recast to the productive spot - even though it was the only barbel I caught that day.

As the rain stopped and the wind dropped late in the morning conditions seemed better, and by mid-afternoon were looking really good. Dusk had to produce a fish or two. Having snagged a rig up while having twenty minutes in a different swim I'd retackled with a double boilie rig, wrapping some paste between the two baits. To this I added a small bag of halibut pellets. This was cast to the previously productive spot, on the edge of the flow on the outside of an eddy. The other rod was still being rebaited and recast to different spots, but that one was in the right place and was going to stay there until debris or a fish shifted it - or I admitted defeat and packed up!

Nige was fishing the next peg upstream and at four o'clock as the light began to fade his 21mm pellet was taken by a fish around seven or eight pounds. Twenty five minutes or so later my double boilie rod was away. The fish didn't feel particularly big, but fought well enough when close in. It wasn't until we got a sight of the width of its back and depth of its belly that we realised the scales and camera would be required. 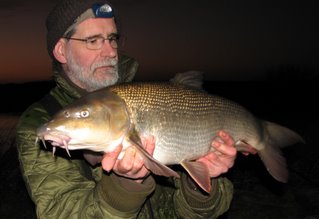 One take that results in a fish like that makes the early start and long drive well worth while. But if I'd kept fidgeting with the baits, it might never have happened.
Posted by Dave Lumb at 4:37 pm