I've taken the decision to approach my piking like I do the fishing I do for other species. To concentrate on fishing waters that are capable of producing big fish, rather than just going fishing for the sake of it. In the past I have been quite happy to go piking anywhere, and to enjoy learning about new waters and trying methods. I'm not saying that I have all the answers, but I have come to understand that it is better to do a few things well than do a lot of things okay.

I've not been piking since February, and last winter I only went a handful of times. Last winter I decided that I would only pike fish on Blithfield. It fished poorly, but I managed to catch a few jacks and two doubles, well two twenties actually... That seemed like a decent result for a season, and I went back to chasing barbel!

This winter I had a day booked on Rutland, but had to cancel, and got lucky in the PAC draw for Menteith, getting a boat for the lure day. Despite a bad forecast that proved fairly accurate, with strong winds and very strong gusts in the rain squalls, it fished well. There were plenty of pike to be caught although a lot were small fish. My mate Nige Grassby and I were catching jacks from the off. Nige had a well built fish of about 13lb, really solid, and another scraper double among his jacks.
The takes, all on the troll, were all the same. A few initial thumps from the fish followed by it going dead giving no indication of their size until it popped into view and then wagged its tail as it neared the boat. You couldn't tell if the fish was three pounds or a double. The take I got around two o'clock was just the same. But it carried on being a dead weight as it cruised past the boat. "I don't think it's all that big" I said, as I turned it very easily. Then it came up in the water and looked like a low twenty as it dived under the boat stripping line off the reel. Next time it came up it grew a bit as it headed towards the net. Obviously a 25 plusser it pulled the scales down to 29lb! 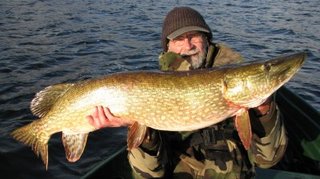 On the next trolling pass Nige got a take that did the usual trick of a few early head sakes then going solid. Where there's one big fish there's usually another. "I don't know what I've got on here" he said, as he pumped it back to the boat. "It could be a big branch." I have an idea we were both really expecting another lump to hove into sight. What actually broke surface was a pike about four pounds!
After unhooking the twenty-nine I found the tail had come out of the Burt and put it carefully to one side (below). No worries, I had some superglue in my spares box. 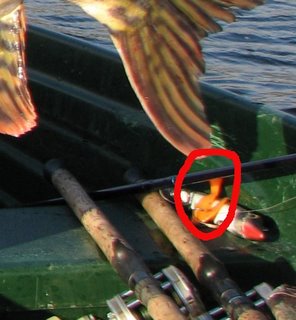 Only one problem - the glue had gone solid. I shoved the tail in the Burt and tried wrapping some insulation tape around it to hold it in place. It worked for a while, but the tape came unstuck and was affecting the lure's action. Despite trying a couple of other Burts I didn't manage to get another take. Mind you, Nige only got one more jack before it got rough again and we ran for home - quarter of an hour before the scheduled finishing time instead of our usual quarter of an hour after.

I guess that session might see me through the winter as far as pike go. But I do have a couple of other pikey tricks up my sleeve for later in the season...
Posted by Dave Lumb at 10:30 pm