Another trip to the Avon on the 14th, the drive south being made in rainfall of ever increasing intensity. Unsurprisingly the river was up a good six inches, and rising. Fishable at first but when the rain stopped around noon the amount of weed coming down made fishing the two swims I had been shown all but impossible. I'm sure fish were still there, but keeping a bait in place long enough to tempt them was the problem.

As the rain fell during the morning one barbel of 8lb 4oz had succumbed to my boilie, fished in conjunction with a four half-bait stringer. The method being to leave the rig out for as long as it took. A chub an ounce under four pounds fell for the same tactic - this time with a small bag of pellets in place of the stringer. But the afternoon saw baits remaining in place for about fifteen minutes, rather than the hour or more that had resulted in fish.

What to do? By mid-afternoon it was too late to head for the Trent as I'd hit the rush hour traffic on the M5/M6. Not worth sticking it out where I was as it would be a brick wall job. So rods wound in and off for a wander downstream. I was looking for somewhere I could present a bait in the flow, but where the line wouldn't collect debris too easily. I soon found it behind a fallen willow. With the level up there was water coming through between the bank and the willow, a slack behind it and the main current pushing round the outside of the bend beyond.

It was a bit of a cramped spot with the level as it was, and the overhanging trees made casting difficult, but a move was made. In went a few droppers of pellets on the outside crease and two baits (with attendant bags of pellets) went out. One at the top of the crease and one further downstream where the slack tailed off. 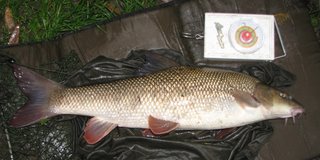 After only fifteen minutes another eight pounder was landed, this one two ounces heavier, on the downstream rod, followed by a six pounder an hour later. Far more satisfying to use my brain to catch those two fish than had I caught them from a swim I had been shown. The river continued to rise slowly yet remained fishable, but shortly before nine pm a smallish bream decided me to get some shut eye and plan the following day's campaign.

Up at five thirty and a walk to the river showed it had risen a good six inches more. The willow swim was almost cut off and the eddy more of a swirling cauldron than the calm haven it had been. It could have been fished but would have been a struggle. A walk along the whole stretch found no more likely looking spots. Well, there was one, but there was no way a fish could have been landed from it, so it was out of the question. The original swim was inaccessible, but the next one down, from which a bait could be placed in the same spot as from the upstream swim looked okay. Just so long as there wasn't much rubbish coming down. I decided that I might as well have my bacon butty on the river bank as in the car park, so I put a couple of rods out. This soon proved that the weed hadn't abated, and from placing my landing net in the water it was obvious the river was still coming up. After a couple of hours I'd had enough, tackled down and headed home.
Posted by Dave Lumb at 4:27 pm