Having been invited down to the Midlands for a spot of zander fishing by John Cahill I also got the chance of a day with Mick Bowen on the Avon and one on the Wye with Steve Bown after barbel as the zander fishing would be a nocturnal affair.

The first night's zedding was a flurry of activity, but a lot of dropped runs and only small fish landed. I lost one and landed one. Nothing above four pounds. So off to the Avon with Mick in the morning. After a few hours Mick went trundling pellets round a bend and was soon into a fish of about five or six pounds. 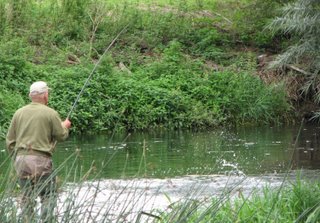 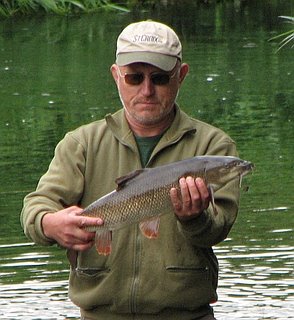 Not long after I was into my first Avon barbel. Far from a monster, but a fish from a new-to-me river nonetheless.
Another fish, a little bigger came along before it was time to pack up and head back to the zedding for the evening. 10mm halibut pellets fished over loose fed 6mm and 10mm pellets with a bag of the same on the hooks did the trick.

The night was quiet apart from Steve Bown getting a zander about six pounds early on and me losing an eel in the three pound range when a treble got stuck in the landing net. A late breakfast was had in the morning before heading off to the Wye with Steve. It wasn't long before he had the first barbel of the day, one of around four or five pounds. Things went quiet and a move was called for.
In went some feed and as soon as some cloud cover rolled in, right on cue, Steve hooked and lost a fish. This set the pattern and every time some cloud came over, it was a bright and hot day, the rod tops would start rattling. Mine was the next to lurch over and we were soon guestimating the weight of the fish in the net. The scales decided the argument by settling at 8lb 14oz - not bad for a first Wye barbel. 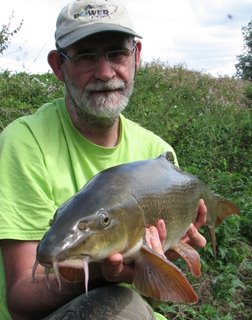 I hooked and lost two more fish before landing a six pounder that turned out to be the last fish of the day.

The final night's zander fishing kicked off well for Steve with a seven pounder, but the rest of the night was quiet in the extreme - which was good for me as I was lacking sleep! 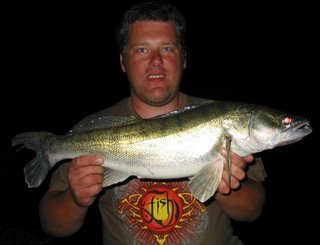 Breakfast at six and on the road home by seven fifteen along a strangely quiet motorway system!

Thanks to all concerned for the hospitality.
Posted by Dave Lumb at 1:34 pm

Having caught my fifth tench of the season from water X on April 25th, my second visit, I got my sixth on the 11th of August. A battle scarred fish of 6lb 5oz. 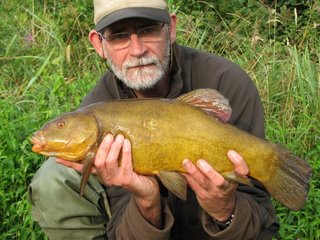 
I was itching to try out my new camera so took some pics of myself holding a hybrid this session. Not the largest I'd had, but still a boilie munching three pounder. 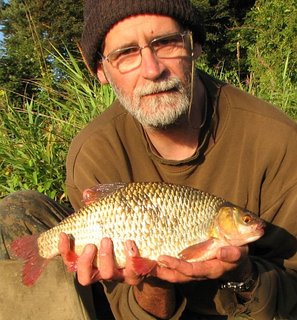